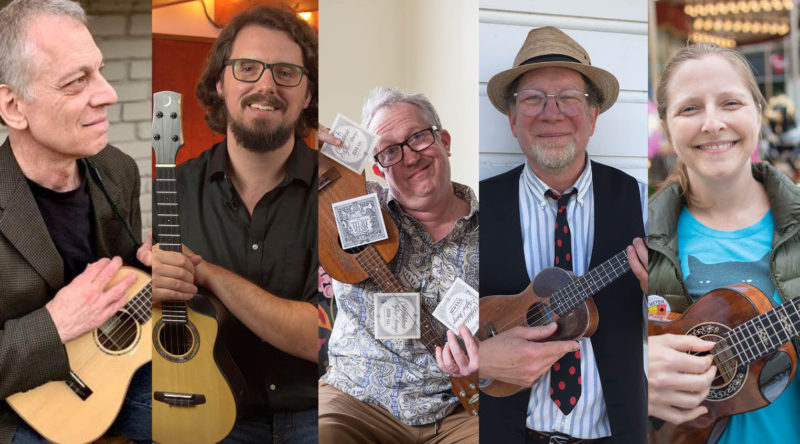 BY HEIDI SWEDBERG | FROM THE SUMMER 2020 ISSUE OF UKULELE

We spoke with five professional ukulele players—Sandy Weltman, James Hill, Mick Jeffries, Joel Eckhaus, and Sarah Maisel—about alternate tunings for their instrument. It turns out that between the soprano, concert, tenor, and baritone versions of the instrument, there are plenty of iterations to tinker with.

Sandy Weltman is a Plectrum Practitioner

“The ukulele is such an amazing instrument. It still has so much unexplored territory and potential. I used to think of myself as not a real ukulele player until a few years ago when I realized that, well, I am playing on a ukulele. Earl Scruggs was a radical pioneer. He played the banjo unlike most people before him had ever done or even thought about doing. I don’t think anyone back then ever considered him to not be a real banjo player. I’m by no means comparing myself to Earl Scruggs, but I very much consider myself to be a ukulele player—I’m just out exploring.

“While I’ve always loved the sound and timbre of the banjo, I’d always felt that the plectrum tuning could have a whole world of possibilities on a mellower sounding instrument. I began to experience some serious hand/finger/arm issues and it was becoming more and more difficult for me to play. One day, while at a friend’s house, I was invited to check out his brand-new ukulele. I loved the sound and feel of it . . . I just couldn’t relate immediately to the tuning. I asked if it would be OK to tune the first and fourth strings down a whole step and—voilà—my career as a ukulele-ist began. I loved the nylon strings, the size of the instrument didn’t bother my arm, and, most important, I loved the sound.

“Very few people, if any, realize that I’m not in a standard ukulele tuning. Plectrum tuning certainly isn’t for everyone and can get lost in the mix with an ensemble. For me it works very well for arranged solo pieces or with just a singer.”

“I teach in C tuning because that’s how most people tune these days. But when I perform, it’s always in D. It’s how I learned as a kid. D tuning is my mother tongue. It’s brighter, louder, and the strings have a nice snap to them (I just crank regular strings up a tone). D and C tunings co-existed happily before the internet was invented. C tuning is more intimate and mellow; it’s the sound of kanikapila. D tuning was perfect for vaudeville and the pre-amplification music-hall scene. Powerful and punchy. And, crucially, it brings the vocal up a tone which makes it easier to project to the back of the room! In a C-tuning jam session, I find my voice getting really tired after an hour or so. Singing low and loud is hard!

“Perhaps the main advantage of D tuning is the way it meshes with other stringed instruments. The easy keys in D (D, G, A) are the same keys that guitarists, bassists, fiddlers and banjo players favor. Whereas C tuning favors the flat keys (F, Bb), making it a natural duet partner for wind instruments.

“If the current trend toward ukulele ensembles continues, we may see a resurgence of D tuning. The reason? Baritone ukulele. Standard baritone tuning has a beautiful low D note, making it a perfect partner for D-tuned ukes. It’s frustrating to play a song in the key of C on the bari because you’re one tone short of hitting that low tonic note! We’ll see.

“Speaking of baritone tuning, years ago I stumbled on the cross-tuning b E b e and I’ve been playing that way ever since. My songs ‘Promenade’ and ‘She’s Still Got It’ are examples of this tuning in action. It’s killer. The best part: I don’t know what I’m doing! I put my fingers on the frets and surprising sounds come out. It puts me back in the beginner’s mind.”

“I liked the guitar/not-a-guitar quality of the baritone, but my brain was dithering between guitar and ukulele names for the same chord shapes. I continue to try to get my beloved bari to play nice with g C E A. With the G and E strings dropped an octave, the result is this incredibly mellow, deep tuning with the same finger positions as everybody else in the room—but I’m playing way-down-low chords!”

“Years ago I had a Washburn (Lyon & Healy) uke—15-5/8-inch-scale, bigger than concert, smaller than tenor—that some refer to as a super concert. Whatever. I built a copy of it and found that it resonated nicely on the A note, so I fooled around with the string gauges and found some that worked well with e A C# F# tuning. It is a nice lower alternative to soprano tuning and a step above D G B E, baritone tuning, but reentrant. I don’t know anyone else using it.

“I tune my cavaquinho D G B E (an octave above baritone) because I don’t want to learn D G B D chord shapes. But having listened to numerous great cavaquinho players, I think that D G B D would work well on uke.”

“Craig [Chee, her husband and duo partner] and I love trying out different tunings. We worked with GHS Strings to create the d G B E string set we currently use, since it is difficult to find this tuning for a tenor scale. It’s great to have the standard tuning mixed with bari-tenor tuning—it adds more depth to our sound and allows us to create some beautiful harmonies. I first heard about it when a friend of mine from Hawaii had a uke tuned that way. He was an older gentleman and told me that was what the tenor-size ukes were tuned to when he was growing up in Honolulu in the 1940s and ’50s. It’s the same one that you hear Lyle Ritz use on his iconic recording ‘How About Uke,’ and my idol, Benny Chong, uses this tuning as well.

“I also enjoy playing around with Bb6 tuning, which is just tuning down the standard C6 tuning a whole step. I was introduced to this by Byron Yasui. It has a lovely sound. Playing in different tunings is a great songwriting tool that can help re-inspire your playing.“