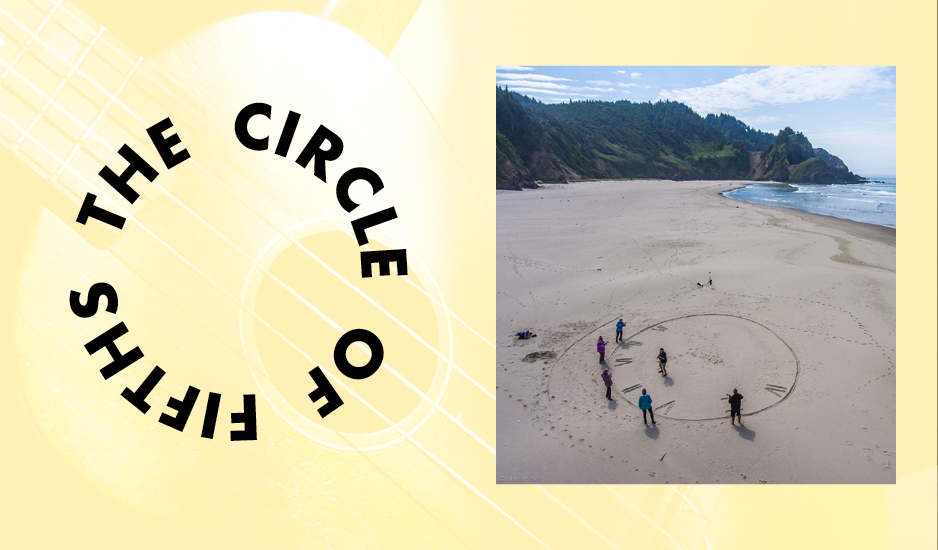 Uke Lesson: It’s Easier Than it Looks— the Circle of Fifths

BY JIM D’VILLE | FROM THE SPRING 2018 ISSUE OF UKULELE

I see the Circle of 5ths as a musical road map, primarily designed to get the music from one place to another in a logical fashion. As with most any map, there are popular routes that see a lot of use. To discover some of these well-worn musical paths, let’s start from scratch and build our own Circle of 5ths.

Draw a circle. Put a C at the top, where the 12 would be on a clock. Now, ﬁll in the other 11 keys found in Western music on the circle, one fifth interval (distance) apart. A dandy tool to accomplish this task is the “5th Interval Finder” you have at the end of your right arm (Figure 1). The thumb is the I chord (one chord) of each new key. Using your fingers one by one, count up five tones from C and you land on your little finger, which is a G. This note, G, is a fifth interval up from C. This is the first fifth on our Circle of 5ths and is positioned at 1 o’clock (Figure 2). Now, with your thumb as the I chord, count up a fifth from G and you’ll end on D, the next fifth on our circle, which you write down at 2 o’clock. Repeat this process all the way around the circle until you have arrived back at C, which happens to be a fifth up from the F at 11 o’clock.

Now that we have a completed Circle of 5ths (Figure 3), let’s map out some popular chord progressions. We’ll need to pick a key to work in. Let’s use the key of C since that’s the key in which the ukulele is most often tuned. The notes in the C major scale are C–D–E–F–G–A–B. You’ll notice by looking at the Circle of 5ths that there are five additional notes on the circle that we don’t need in the key of C. So, let’s cover them up. It’s less intimidating using only half the circle (Figure 4).

The two most popular chords in the two-chord song form are the I chord (one chord) and the V chord (five chord). Chords next to each other on the Circle of 5ths sound better together. In the musical zone, close neighbors are harmonious neighbors! Prove this to yourself by playing “Skip to My Lou” using the I (C major) and the V (G major) chords. The chord progression is written I–V–I. Listen to the changes between these two major chords. They are both very even-sounding.

Now, play “Skip to My Lou” again, but this time using a G7 (G dominant 7) chord instead of the G major. This chord progression is written I–V7–I. Hear the tension in that V7 chord? The reason for this tension is that we have added one additional note into the G major chord, an F, and the F doesn’t get along with the B found in G major (G–B–D). Play the F and B notes together and let the fighting begin! Looking back at your Circle of 5ths, notice that F and B are 180 degrees opposed to each other. That’s why they fight. This tonal tussle is only resolved when the F note moves a half-tone back to E, and the B note moves a half-tone to C, resulting in the very restful I chord of C major (C–E–G) where the song started.

Armed with this tiny bit of information about the tension and resolution of the V7–I, and using the Circle of 5ths, you can now play “Skip to My Lou” in all 12 keys using the I–V7–I formula: Key of C, C–G7–C; Key of G, G–D7–G; Key of D, D–A7–D, and so on. You can further exploit the tension of dominant 7th chords to play boatloads of songs that your ears are already familiar with using the following chord progressions (Figures 5–8). Familiarize your ears with these four incredibly popular routes around the circle and before you know it, when they come around in a song, you’ll have a pretty good idea where the music is going to lead you!

Music educator and facilitator Jim D’Ville is on a mission to get ukulele players off the paper and into playing music by ear. Over the last six years he has taught his “Play Ukulele By Ear” workshops in the United States, Australia, and Canada. Jim is the author of the Play Ukulele By Ear DVD series and hosts the popular Play Ukulele By Ear website www.PlayUkuleleByEar.com.

Andrew Molina goes from Hendrix to Satie on his Latest Record, EVOLV3