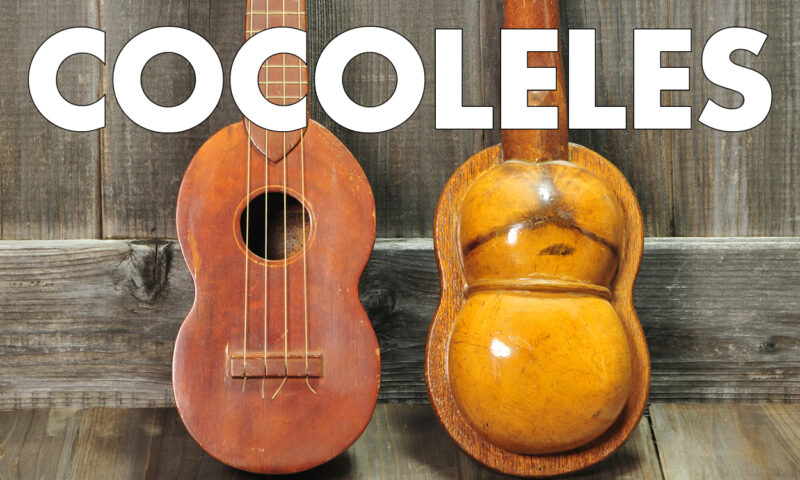 Cocoleles: What’s More On-Brand Than a Ukulele Made From a Coconut?

BY SANDOR NAGYSZALANCZY | FROM THE WINTER 2018 ISSUE OF UKULELE

If you’ve ever built a ukulele from scratch, you know there are several tricky bits to tackle, from shaping the neck and installing the frets to the most time-consuming process of all: building the body from scads of separate parts. It’s no surprise that in the 1970s, instrument manufacturer Ovation simplified guitar and uke body construction by casting a one-piece body from ABS plastic.

But long before Ovation’s plastic ukes, Pacific Islanders were saving time by making the bodies of their ukuleles from coconuts. Abundant on the majority of Pacific islands, including Hawaii, coconuts have strong shells that can be cut, shaped, and polished much like wood. Island artisans and entrepreneurs have long used coconut shell for making all manner of tourist trinkets, from earrings, keychain fobs, and dishes to souvenir spoons and kitschy decorative items.

No one knows when the first ukulele with a coconut shell body was made, but Hawaiian examples of such instruments from the 1910s and ’20s are plentiful. These include higher quality ukes, like the Niu Kani shown here, as well as cheaper souvenir ukes made specifically for tourists. The construction of these ukes is straightforward: After cutting off about a third of a large, dried coconut, luthiers use the remaining part of the shell for the instrument’s body. A thin wood top is glued over the shell’s open side, and a simple fretted neck is attached, usually via screws, to the coconut. The rest of the instrument—tuning pegs, bridge, frets—is done much like a regular ukulele.

By the mid-1930s, an enterprising Maui native named Anthony G. Cox developed his own twist on the coconut-bodied ukulele concept. Cox glued two medium-sized coconuts together to form a body with a figure-8 shape, which not only expanded the size of the uke’s body cavity (resulting in a modest increase in volume), but allowed Cox to fit a koa wood top with a shape like a regular Spanish-style-bodied ukulele. He initially called his instrument a “Kokolele,” but later changed the name to “Cocolele.”

Cox’s design was unique enough that he was granted U.S. patent #2,098,701 in November 1937. In the patent’s text, Cox states that, “…the principle object of my invention [was] to produce a ukelele [Cox’s spelling] having fine tone, and I accomplish[ed] this by constructing a substantial portion of the main body… from cocoanut [sic] shells.” The patent showcases some interesting elements of Cox’s uke, including a wooden “connecting bead” that covers the mating seam between the two coconut shells, as well as a 1/4-inch-wide wood rim that secures the uke’s top to the shells which, Cox claimed, allowed the top to vibrate more freely.

Around the time his patent was granted, Cox and his brother formed Cox Brothers Cocolele & Curio Mfgrs. in Honolulu, which made Cocoleles for three or four years before the business disbanded. Production of the instruments continued, however—Cox licensed his patent rights to the Pacific Mfg. & Sales Co. Ltd. and the Automotive Service Company, both located in Honolulu. (Yes, it seems odd that an automotive company made ukes, but who knows—maybe they did it to pass the time between oil changes?) Automotive Service Co. made its own version of the twin-shell Cocolele, as did Pacific Mfg., whose three-shell Cocolele had a top shaped much like a Roy Smeck Vita-Uke (Cox’s patent covered uke bodies built with two or more coconuts). The larger body cavity formed by the three truncated shells gave this uke more volume and tone than a one- or two-shell Cocolele. All Cox patent ukes were produced in limited numbers, and since production all but ceased with the advent of WWII, these instruments are fairly rare.

You can still buy single-coconut-bodied ukuleles today, although most of these are inexpensive souvenir-quality instruments manufactured in the Far East. Coconut ukes are also currently produced on several South Pacific islands, including Rarotonga, where both local artisans and the inmates of the local prison in Arorangi make them. The tops of these crudely made ukes are often painted with picturesque island scenes.

Sandor Nagyszalanczy is a regular contributor to Ukulele Magazine and a woodworking expert, an avid ukulele collector, and a uke club member living in Santa Cruz, California.