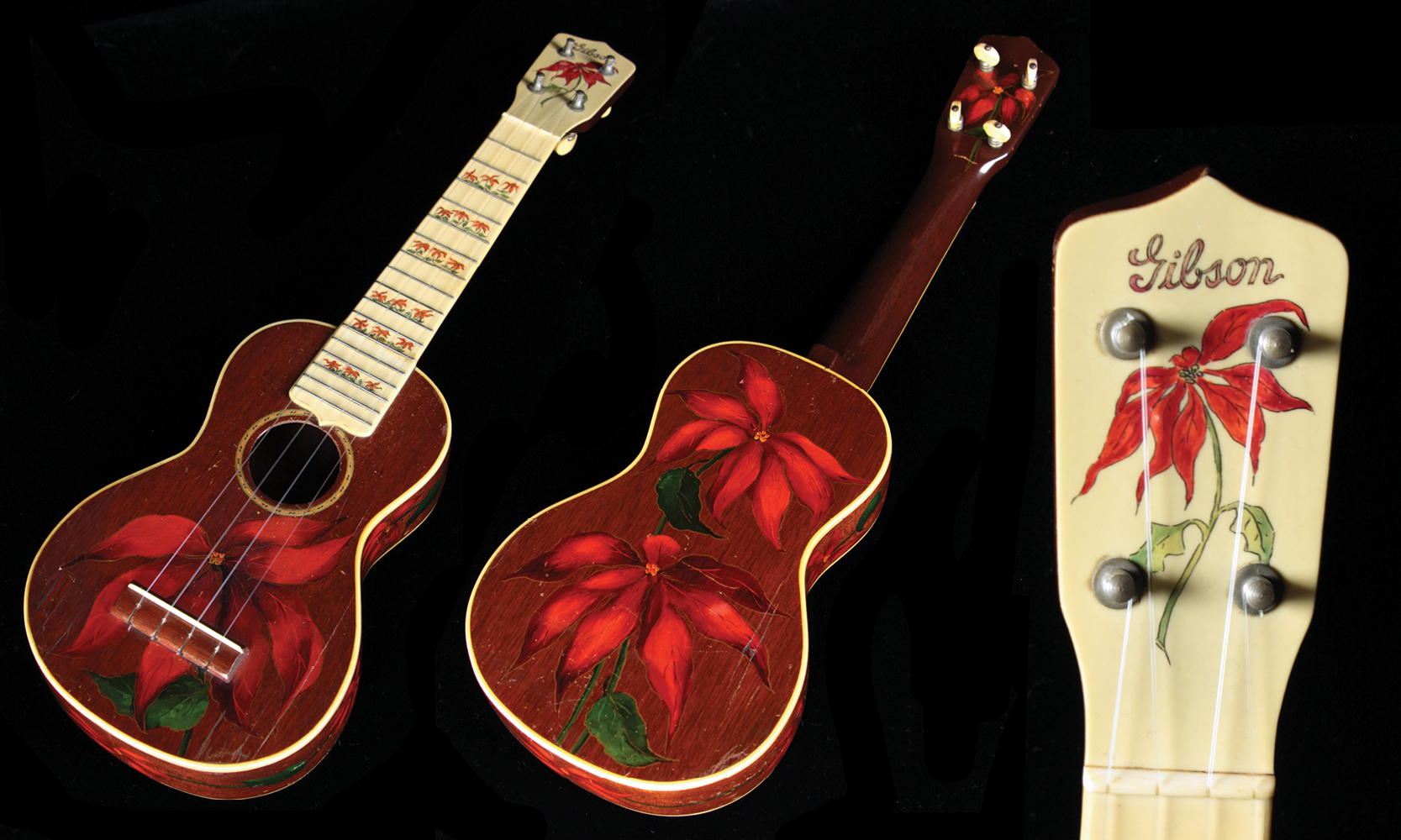 Why Gibson chose to festoon a ukulele with poinsettias is anyone’s guess, but it’s hard to argue with the striking results of this rare Poinsettia ukulele.

Gibson showed up relatively late to the First Wave ukulele party and while it never dipped as deeply into the ukulele pool as its rival Martin, the noted guitar maker also produced wonderful ukuleles. While most were relatively plain or simply ornamented, Gibson also offered a few outlandish designs, like this rare Poinsettia uke from around 1930, that are among the most collectible ukuleles of all. Only four or five Poinsettias are known today and as you might expect from a custom-ordered item, each seems to have unique features.

Based on the company’s top-of-the-line Uke-3 production model, the mahogany body is painted with poinsettias on the top, back, sides, and back of the headstock, with a 17-fret ivoroid fingerboard decorated with poinsettia inlays and pearl-inlaid peghead veneers and body binding completing the striking look.

First cataloged by Gibson in 1927–28 and available through the early ’30s, the Poinsettia is exceedingly rare and highly collectible these days as both Gibson collectors and ukulele collectors vie for the few surviving examples. One of those was recently auctioned online through a Goodwill in central Wisconsin. Even in rough and unplayable condition, the price soared to $5,027—asking prices for a decent example like this one are generally for a few thousand more.

Because these were available as custom orders and Gibson’s records are not known for being overly thorough, some details about what changes happened and when are lost to history, but some details help the guess. According to dealer Vic DeRobertis, this is one of two known Poinsettia ukuleles that have the later “Gibson” inlay on the headstock, which was introduced around 1930, while the earlier models had the company’s earlier “The Gibson” logo.

Around the same time, Gibson also produced the even-more-elusive and over-the-top Florentine uke, which featured the uke’s entire body and back of the neck painted with scenes of Venetian canals and gondolas, despite the inconvenient truth that Florence is on the other side of the Italian peninsula. Gibson made just enough of those that it is certain they exist, but may be even rarer than this Poinsettia.

Uke collectors may never know how the Florentine and Poinsettia ukes came to be, but the results are wonderful little pieces of art.