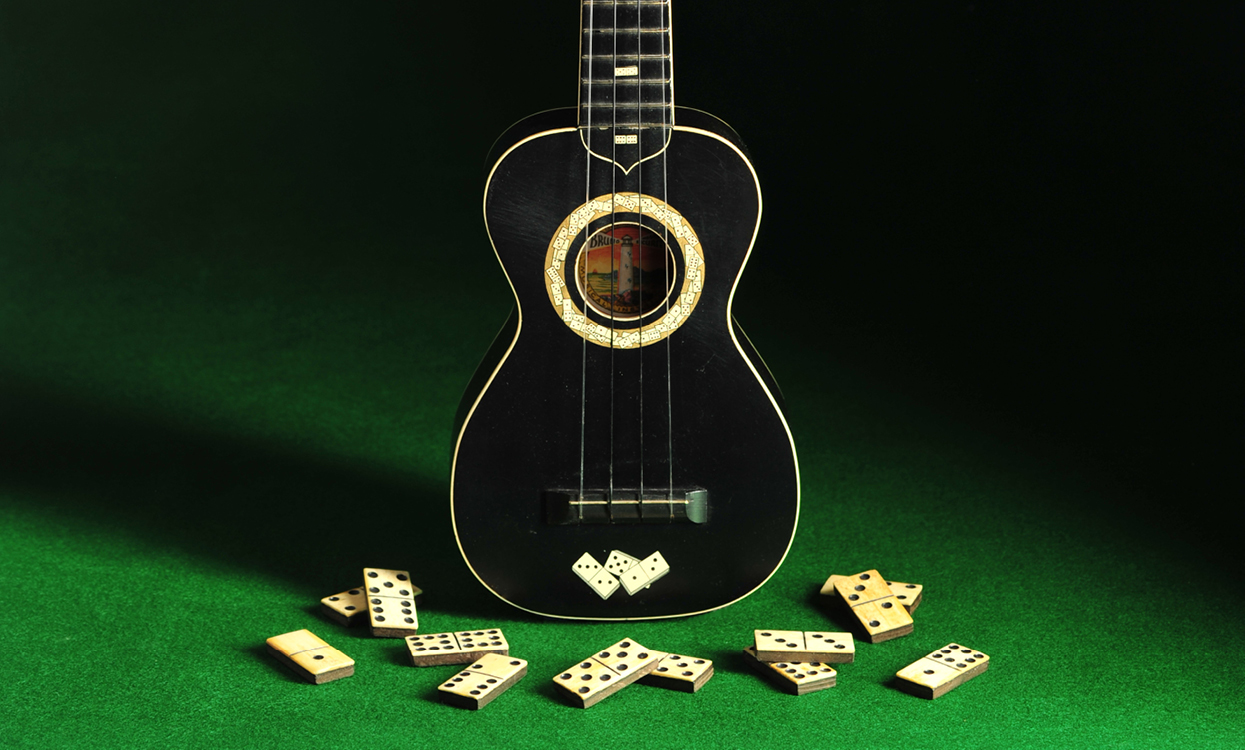 BY SANDOR NAGYZLANCZY | FROM THE WINTER 2017 ISSUE OF UKULELE

Of all the hundreds of painted, stenciled, or otherwise decorated ukuleles made in America during the “uke craze” of the 1920s, few are as attractive and instantly recognizable the Le Domino. Adorned with stylish decals of small dominoes, this uke simply emanates charm and delight. In addition to a domino rosette bordered in gold surrounding the soundhole, and a trio of larger dominoes just below the bridge, miniature dominoes also mark this uke’s fretboard at the 3rd, 5th, 7th, 10th, and 12th positions. Better still, each bears the same number of dots as the fret it marks—a three-dot domino at the 3rd fret, a five dot at the 5th, etc. The 12th fret domino (which is actually where the 13th fret would be, if the uke had one) is on a decal that creates the illusion of a fingerboard extension.

Although the ukulele’s painted body and neck were built from inexpensive birch wood, the Le Domino was a relatively well-constructed instrument with some classy touches, including white celluloid binding around the top, back, and soundhole, white Bakelite tuners, and a white/black/white celluloid nut. Even the original strings echoed the dark/light theme, with white strings top and bottom and two black strings in the middle. The Le Domino’s solid-birch top employed an unusual fan-bracing pattern that helped it have a decent sound for a ukulele not built from traditional tone woods like mahogany and koa. Curiously, it has an unusually long scale for a soprano-sized instrument: 14-1/8 inches long, as compared to the 13-3/4-inch scale most commonly used on Martin, Gibson, Lyon & Healy, and other soprano ukes of the period.

The Le Domino model was the brainchild of James R. Stewart, a Chicago luthier who, in the early 1920s, had worked for the Harmony Company, the world’s largest manufacturer of stringed instruments at the time. In 1925, he started his own J.R. Stewart fretted instrument company (J.R.S Co.). Within a couple of years, he had patented the Le Domino’s unique headstock design and began producing his long-scale soprano ukuleles, which some music catalogs listed as a “concert size” instruments. With early success and sales, he expanded the line to include Le Domino tenor ukes and banjo-ukes, as well as guitars, tenor guitars, tiples, and mandolins. These featured all (or most) of the same decorations, appointments, and constructions as the original soprano. For example, the Le Domino banjo-uke sported domino fret markers, mini dominoes surrounding its black body, and a golden domino ring centered on the back of its resonator.

Despite his early success with the Le Domino line, J.R. Stewart’s luck would soon run out. In 1928, musical instrument manufacturing giant Lyon & Healy got out of the stringed-instrument-making business and Stewart bought their equipment and factory on the South Side of Chicago. Less than a year and a half later, the U.S. stock market crashed, leaving J.R. Stewart—as well as most other manufacturers—scrambling. By the spring of 1930, Stewart declared bankruptcy and sold the entire business to musical distributors the Tonk Brothers. Eventually, Regal, another Chicago-area instrument manufacturer, obtained the Le Domino instrument line, which they continued to manufacture for some years thereafter. In addition to the classic black-painted Le Domino ukuleles, Regal also made a cheaper, much plainer “blond” model that featured only a single domino decal on the top, below the bridge. The Regal-era instruments are distinguished by their headstocks, which are simpler and less elegant that Stewart’s original patented design.