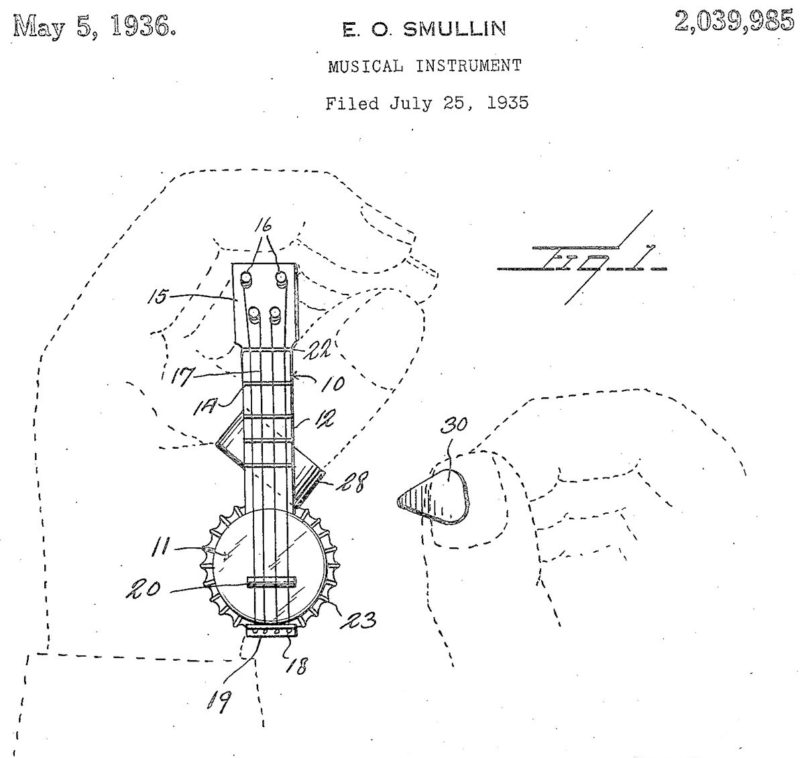 For four-string strummers, exploring the history of ukulele patents provides both an entertaining look at some of the more unusual, clever, and sometimes questionable ideas that instrument builders have come up with. Patents can also lend a keen bit of insight into the origins of certain manufactured ukulele models, as well as the evolution of ukuleles in general.

Did you ever have an idea that was so unique, so brilliant that you thought it might have real financial value? If so, then it’s likely that your next thought was how you could protect your idea so that no one else could benefit from it. That’s basically what patenting an invention does—it acknowledges that you’re the one who came up with the idea and provides you with some degree of protection against others stealing your intellectual property for financial gain.

Founded in July of 1790, the U.S. Patent & Trademark Office has granted many millions of patents to all kinds of inventors: serious professional engineers, designers and scientists, as well as backyard tinkerers, mechanics, and luthiers, including ukulele makers.

The two most common types of patents are utility patents and design patents. Utility patents cover all sorts of inventions: a device or gadget, like a new ukulele tuner; a process, such as a method for molding a plastic instrument; or an improvement to an existing device, such as a bridge that makes uke strings easier to attach. Whatever the invention is, it must be unique, practical, and operable and have a real-world use. Design patents are granted for original ornamental designs for articles: an ultra-modern jet ski, a fancy kitchen ladle, or a uniquely shaped ukulele. Both kinds of patents are valid only in the United States; foreign patents fall under different jurisdictions.

Why would a ukulele maker go to the trouble and expense of applying for a patent? One significant advantage is that it prevents a competitor from copying their idea for the duration of the patent—14 years for design patents, 20 years for utility patents. Ukulele manufacturing legend Samuel Kamaka gained an edge over other uke makers when he created a unique soprano uke with a pineapple-shaped body. His instrument not only looked cool, but had a fuller, more resonant sound and was easier to manufacture than a traditional uke. His 1928 design patent (#D 74,178) assured that Kamaka was the only company producing pineapple ukes at a time when competition was high due to the uke’s ever-increasing popularity. By the time Kamaka’s patent ran out in 1940, he was the only major Hawaiian ukulele maker still in business.

In order to be awarded a utility patent, an invention must be totally unique or offer innovative improvements to an existing design. A good example of the latter is Nichol Pedersen’s 1929 patent (#1,721,710) for “An improved form of the ukulele.” The text of his patent claimed that “the forms of the ukulele heretofore produced are comparatively crude instruments and do not give a volume or quality of tone which is comparable with that of other musical
instruments, such as the violin or the cello.” His improvement was to fit four pairs of doubled strings to an otherwise standard uke. The instrument differed from a traditional taropatch because Pedersen paired a silk string and a steel string for each doubled string pair.

Sometimes, patentable ideas merge elements that have never been combined before. Probably the most impressive example is Nicola Turturro’s “Turnover,” (1929 patent #1,723,751), a thin-bodied instrument featuring a ukulele on one side and a mandolin on the other. Morris Rothman obtained a patent in 1926 (#1,611,563, seen below) for his novel integration of a ukulele and a walking stick. He might have created the handiest travel uke ever, but it couldn’t have been very loud or sounded very good, thanks to its incredibly skinny, shallow body.

Some uke-related patents are based on even less-practical ideas. Take for example Johnston’s 1927 capo device (#1,616,859). In lieu of the kind of removable clip-on capos we use today, Johnston’s device was meant to be permanently mounted to a uke’s headstock and could only reach up to the third fret (would you screw one into your prized Martin?). Even less impressive was Kordick’s uke tuner (1929 patent #1,697,508) which clamped to the neck of a uke to provide a very complicated way of performing a relatively simple task.

But my choice for the most dubiously useful uke patent is Edmund Smullen’s 1936 utility patent (#2,039,985) for a miniature ukulele mounted to a ring worn on the user’s thumb. All four of the diminutive instrument’s strings were supposed to be fretted with one finger while strummed with a tiny pick! How a patent examiner thought this was a “real world” device is beyond me!

Utility patents often provide an interesting glimpse into the development of instrument-related inventions over time. One of the first automatic chord-playing devices was patented by Nicholas D. Stein in 1924 (#1,519,881). Originally designed for guitar, the device was then adapted and fitted to a most unusual uke (seen in the photo on page 40) which had no frets. The player could only sound chords by pushing one of the 12 buttons on the device. The next five decades saw a slew of patents granted for removeable chord playing devices, including Reed’s metal “Noteless” player (#1,374,388) and Maccaferri’s six-button plastic “Chord Master” (#2,669,151).

Most design patents granted for ukuleles involve the instrument’s overall body shape. Most such patents diverge considerably from a standard uke’s figure-8 body shape (based on the Spanish guitar) or banjo uke’s round skin-covered body. Edward N. Guckert’s 1923 design for a banjo uke (#D 62,235) featured a horseshoe-shaped body with an unusual wooden lower portion. Guckert (best known for his 1917 instructional booklet “Guckert’s Chords for the Ukulele”) called his instrument a “Jazuke; the instrument of enchantment.” In addition to Kamaka’s pineapple uke, early ukulele design patents included Turturro’s “peanut” ukulele (#D 74,766), Lyon & Healy’s canoe-paddle-shaped “Venetian” uke (#D 75,494), and Harmony’s Valencia-brand banjo uke (#D 71,589). In the case of these last two patents, both were filed by the presidents of the companies that manufactured them: Marquette Healy of Lyon & Healy and Jay Kraus, Harmony’s president from 1916–1940.

Although the majority of ukulele design patents were awarded in the 1920s, ’30s, and ’40s, the practice has continued in more recent decades. Martin’s narrow-bodied Backpacker Uke is based on design patent #D 270,543 granted in 1983. Several design patents for electronic ukes were issued in the early 2000s, including Atsushi Kitazawa’s electronic uke (#D 510,946), which features an onboard amplifier and a speaker in the soundhole, and the cutaway-bodied uke with pickup (#D 574,036) designed by Bong Yol Kwak (et al.) and manufactured as the Eleuke by BugsGear in Japan.

Applying for a design patent requires only the submission of an accurate drawing and a description of the item. But obtaining a utility patent is complicated and is often a lengthy and costly process. Applications must include a summary describing the invention, accurate drawings that include all relevant details, and a list of claims that specify the various unique and distinct elements or properties of the invention. Claims can be simple or extensive, specifying one or a dozen or more particular elements. For example, Anthony Cox’s 1937 patent (#2,098,701) contains only two claims, both related to the process of joining a pair of coconuts with a wooden ring to form the body of his Coco-lele uke. In contrast, Joe Luttwak’s 2017 utility patent (#9,818,380 B2) contains 19 claims that cover all aspects of a special light and stiff construction process using natural fiber composite materials. Luttwak’s company, Blackbird Guitars, builds its Farallon and Clara ukuleles from this patented “Ekoa” material, which is made of flax linen fiber combined with a bio-based resin.

A significant part of the patent application process requires the inventor (and/or their attorney) to search through patent records to assure that no identical (or very similar) inventions have already been patented or had a patent applied for. U.S. patents can be searched online, but there’s a catch: To search through patents granted before 1976, you have to know the right classification number and subclass. Unfortunately for jumping-flea enthusiasts, ukuleles don’t have their own class number; most fall under the guitar’s classification (class 84, subclass 267). However, many ukulele-related patents fall under other classifications, and as there are literally thousands of class/subclass combinations, searches can be tedious indeed!

All patent applications are reviewed by a patent examiner who determines if the idea is worthy of being granted its own patent. This process can take years and most inventors don’t wait until they actually have a patent in hand before manufacturing and marketing their inventions. In order to inform would-be competitors that an application has been filed, inventors are allowed to label their items “Patent Applied For” (usually abbreviated “pat. app’d. for”) or, in some cases, “Patent Pending.” Such labels are often seen on ukuleles, either printed on a paper label inside the body or stamped on the back of the headstock or on the patentable part itself: The “Tivolette” banjo uke’s pressed metal “Music Steps” fretboard says “PAT.APP’D.FOR” just above the nut. Once a patent is granted, uke makers will typically label the instrument with the actual patent number.

The length of time it takes to obtain a patent can create problems if two (or more) people file applications for similar inventions around the same time. Technically, the person who files first should receive priority. But that doesn’t always happen, due to the complicated nature of both the patenting process and overlapping claims in the patents themselves.

Consider the case of Mario Maccaferri and George Finder, both ingenious luthiers who applied for patents for the construction of injection-molded plastic instruments. Even though Maccaferri applied for his patent (#2,597,154) first, Finder’s patent (#2,588,101) was awarded first. Both men went on to manufacture their own brands of plastic ukes: Diamond Head and Mauna Loa for Finder; Islander and TV Pal for Maccaferri. In 1950, Maccaferri filed a lawsuit against the manufacturers of the Emenee Flamingo uke, alleging that the design of the Flamingo infringed on his plastic uke patent. (It’s up to a patent holder to identify cases of infringement and defend their patent in court.) Although Maccaferri lost his case and subsequent appeal, he still went on to manufacture 9 million plastic ukuleles before selling his patents to Carnival in 1969.

Once a patent is granted, inventors may choose to produce it themselves or assign (transfer the ownership of the patent) or license it to another party. For instance, Walter Kirk’s patent for a soundhole-reinforcing ring (1925 patent #1,559,108) was employed by Lyon & Healy on a great many of their Washburn-brand ukuleles. The raised rings, made of celluloid, gave these ukes a distinctive appearance, although any advantage regarding the ring’s soundhole-reinforcing properties are somewhat questionable.

Lyon & Healy also licensed a design patent for a triangular-bodied banjo uke granted to Paul Arthur in 1927 (#D 74,133), but instead of building the instrument as is, they employed the rounded triangular body shape for their classy Shrine model ukes. Coincidentally, another triangular-bodied ukulele was developed by Canadian music educator J. Chalmers Doane as an inexpensive “teaching ukulele” for his students. Doane’s 1977 utility patent (#4,041,830) was assigned to a couple of different instrument manufacturers who built Northern brand ukes for Canadian school music programs.

From the Ukulele store: The Ukulele – A Visual History traces the ukes evolution with colorful whimsy. Meet some of the world’s greatest ukulele players through profiles, photos, and more, with color photos showing more than 100 exquisite and unique ukes, vintage catalog illustrations, and witty ads that capture the craze of the 1920s and ’30s.