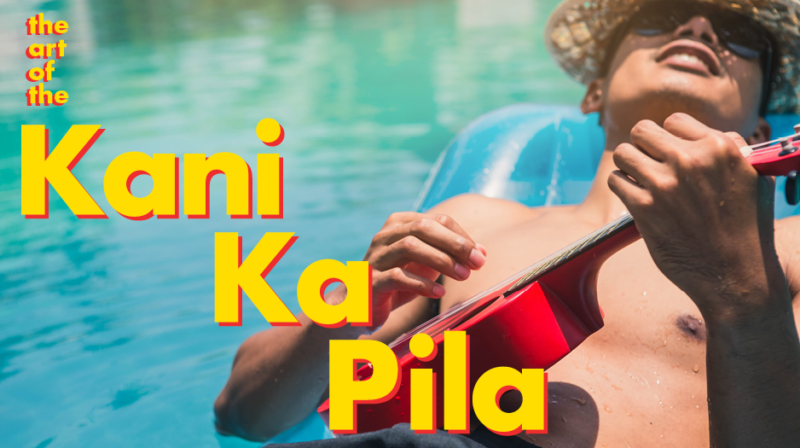 The Essence of Kani Ka Pila? Let’s Play Music Together!

From the Fall 2017 issue of Ukulele | BY STEVEN ESPANIOLA

As a young boy growing up in Hawaii, I never really knew what a kani ka pila was. It simply wasn’t a term that was heavily used or thrown around back then like it is today. One thing was certain: My family would have frequent gatherings on Sundays, and at these get–togethers my uncles, aunts, cousins, neighbors, and friends of family would congregate to play spontaneous music, eat, drink, play cards, and tell stories until the wee hours of the morning. This was the norm in my childhood. Not everyone would necessarily have an instrument in hand at these parties, but everyone in attendance would manage to have a ton of fun! There were usually two or three guitars, a scattering of ukuleles, someone on the spoons to hold down the rhythm, a homemade washtub pakini bass, and definitely no shortage of singers! I would later come to find out that these spontaneous gatherings were undoubtedly the very definition of a kani ka pila!

The phrase “kani ka pila” is a fairly modern one, with origins dating back to around the 1940s, and was most likely first used to describe early, informal jam sessions much like the ones from my youth. In my family, it was generally assumed that guitars and ukuleles were brought to parties, so the phrase wasn’t used much out loud. Kani ka pila is implied to mean “let’s play music,” but it is not a literal translation from the Hawaiian language. To get a bit of clarity on the meaning, I asked Keola Donaghy, assistant professor of music at University of Hawaii Maui College, and a respected scholar of ‘olelo Hawai‘i (Hawaiian language), for some input.

Through email, Donaghy responded, “Kanikapila is three words, kani ka pila. Literally it would mean ‘the instrument [makes a] sound.’ It is a verb phrase. It has come to be used as a noun, as in a backyard jam session, but it is not used in the Hawaiian language that way. If I was to see someone with an instrument and want them to play it, I would say ‘e kani ka pila,’ which means ‘let the instrument sound.’ This has to do with the preference of the passive voice in Hawaiian.”

There are certain things that must occur to be considered a kani ka pila in the truly Hawaiian sense and we’ll attempt to break down some of those components here. First and foremost, you must have fun! The vibe and attitude should always be loose and without any of the usual formality of Western music. Kani ka pila is a reflection of the relaxed lifestyle we’re accustomed to living in Hawaii.

The kani ka pila parties I described earlier were mostly in backyards, on beaches, or on a lanai at a family member’s house, but they can happen pretty much anywhere. As long as you all set up in a nice comfortable area that can accommodate your group, any environment can work so you and your group can let loose and make music. Ukulele wiz Corey Fujimoto recalls, “I would always get together and jam with my good friends at our local laundromat and share new songs with each other.” Wherever you decide to meet up, make sure you position yourselves so that everyone is visible or at least within earshot of each other. Listening, and being able to see your fellow musicians, are very important. You want to be able to pick up any sudden cues or impromptu changes and adjust on the fly.

The principles described here can be used for most any type of jam session environment, but for the sake of simplicity and tradition, we’ll use Hawaiian music as the base for the following examples.

The first order of business is picking a song. Typically, the rule of thumb is whoever is leading the song gets to pick the song. (Or, vice versa, whoever picks the song is the leader.) Picking the song can be fun, but can also be a little tricky. In any sort of traditional jam session, you want the vibe to be very spontaneous and without much thought. Usually there is no order and no protocol. What you don’t want to do is spend 5–10 minutes thumbing through a book looking for that “perfect song.” Pretty much, whoever is ready and willing to start a tune is on-deck. If that someone is you, then you should be ready to go at a moment’s notice. Pick a song that you’re familiar with and really comfortable playing. Depending on how many players are present, you may not get another chance to lead.

There are two schools of thought here. Since you are leading the song, proper musician etiquette says that you should be allowed to select a key that you are comfortable with, and in the words of uncle Led Kaapana, “jus’ press!” Or, you can take a more democratic approach and transpose the key to one that suits your entire group. The latter definitely takes more sacrifice, but will probably earn you more popularity points. Once you’ve established the key, it’s time to figure out an intro to your song.

Song intros can be as difficult or as easy as you want them to be. In the ukulele world, and with Hawaiian music in general, song intros are usually established by a vamp that is basically a repeated section of music. Vamps are very important and are typically composed of a strummed ukulele part that sets the vibe, tempo, mood, feel, and rhythm of a song. That’s a whole lot of information to pack into four measures of music. A vamp becomes even more important when there is a hula dancer involved, as it lets the dancer know when he or she should begin.

Here’s an all-purpose intro in the key of C major. It starts on what’s known in technical terms as a  secondary dominant chord—one that acts as the V of a chord other than the tonic (in this case, C.) In other words, the D7 chord is the dominant (V) of the chord that follows, G7, which is in turn the dominant of C. If the 16th-note strums are too intimidating, just use an eighth-note-based strumming pattern. And try transposing this—and the proceeding examples—to other keys as well. To play it in G major, for instance, start on an A7 chord.

This intro, in the key of F major, also starts on a secondary dominant chord. It also brings the iii chord (Am) into play. As indicated by the arpeggio signs (the vertical squiggly lines) in bar 1, try playing select chords with a roll of your thumb, from lowest note to highest, such that you quickly hear the individual notes. An old chord-switching tip is demonstrated here as well: When you move between grips, strum the open strings. This buys you time to change those chords while adding a little harmonic and textural color.

When you’re in the body of the song, it may feel like you’re on easy street, but this is where you need to be at your most alert. It’s important to listen to those around you and blend to the best of your abilities. A wise friend once told me, “If you can’t hear the person next to you, you’re playing too loud.” Listening to the person next to you allows you to be more focused on the song and aware of how you should be contributing to it. You should also be considering dynamics. Dynamics are basically the relative loudness of your playing. It can be a very powerful tool used to evoke different emotions from your audience or your fellow musicians.

Are there any aspiring Jake Shimabukuros in your group? If so, put them to the test and shout out “pa‘ani” after a couple of verses, which translates into “play” in Hawaiian. A pa‘ani is a solo section where you would typically improvise over chords of the verse.

After everyone has taken their solos and you approach the end of your song, you need to think about a couple of things before that final moment arrives. Will the song modulate? A modulation is changing from one key to another, which adds some sonic build-up to help resolve your song. In most Hawaiian songs, the logical place to modulate is one whole-step up from the current key. Some songs continue to modulate a whole-step or even two whole-steps after that.

Another important thing to think about is how the song will end. This is usually never discussed beforehand, but luckily in Hawaiian music there is one very standard, go-to ending that most musicians gravitate toward. That is the chromatic run. For example, if you were playing in the key of C, you would play a chromatic run up to the C chord starting from Bb. This ending is also very common in the blues and swing music (and is most likely where it originated).

In Hawaiian music, it is generally assumed that this is how you will end all songs.

You’ve no doubt heard this stock but cool Hawaiian ending involving a chromatic move, from the bVII chord to the I. In this example, which is in the key of C major, a little ninth-chord action sets up the move. Play the first three 6/9 chords rhythmically, but let the last one ring out for a bit.

You probably already know this classic outro as well: The tempo is disrupted at the end of a song, and things wrap up with a handful of chords played in unmeasured time. This example, also in C, starts off on that secondary dominant chord (D7) and in bar 2 includes a nice harmonic surprise—the bVI chord, Ab. Play each chord tremolo style—as directed by each pair of slanted lines, rapidly brush the strings up and down with your index finger or plectrum, drawing things to a dramatic close.

You did it! You made it to the end of your song and should bask in the glory of your accomplishment! The good news is that kani ka pilas don’t end with just one song. You typically get to repeat all of the fun we just described over and over again. The idea is that you take turns sharing songs and during all of this exchange of music, you find a connection with the people you’re playing with, while you trade stories, enjoy food, and hopefully make new friends. This is the essence of kani ka pila!

Ukulele Basics – Learning and Practicing includes lessons from some of the top names of the uke-teaching world including Jim Beloff, Heidi Swedberg, Sarah Maisel, Craig Chee, Jim D’Ville and Cathy Fink. These top teachers share important tips on everything from optimal practice habits to tuning with your ears and reading music.