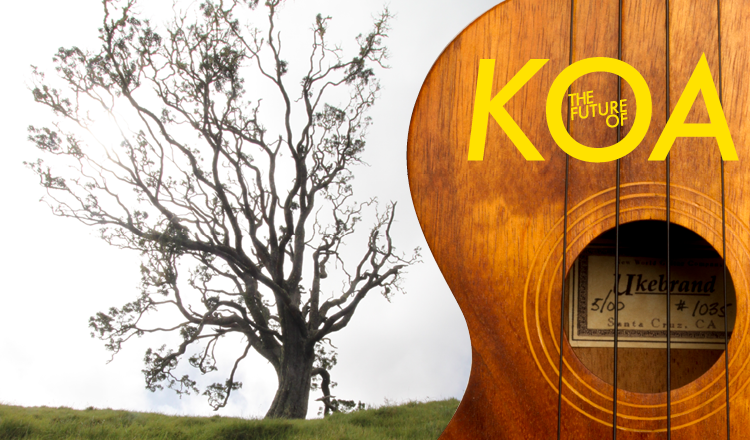 Saving Koa: Thanks to Dedicated Efforts and High Value, Koa Will Sing for Generations

From the Winter 2017 issue of Ukulele | BY PETER C. HOWORTH

First the bad news: the University of Hawaii estimates that about one-tenth of the state’s original koa forests remain today. The researchers started the clock in 1779, when Captain James Cook arrived in Hawaii and koa and ’ohi’a forests were the dominant canopy trees of the six larger islands.

Many readers might think the decimation of koa was due to the richly hued wood’s immense popularity for the backs, sides, and often tops of ukuleles and guitars. In actuality, the furniture industry has always gobbled up most koa timber. Instrument sets comprise only a small part of the harvest.

But the real reason for the severe decrease in koa forests was clear-cutting that began in the 1830s—not for timber, but for opening up vast areas of land to cattle grazing, and later, for sugar cane. Once the cattle proliferated, they browsed on the seedlings and cropped the tops of the larger trees, further impacting the forests. Many endemic plant and animal species dependent upon the forests disappeared, some never to return.

“The furniture industry has always gobbled up most koa timber.”

Hawaiian sandalwood began to be harvested in the 1790s for trade to Asia. By the 1830s, the sandalwood trade collapsed because the supplies were almost exhausted and sandalwood species from other countries became available. Though koa didn’t have an international market in the 1800s, much of it was used in Hawaii. Nonetheless, most of the koa at lower elevations disappeared. Forests that thrived from about 200 feet to 600 feet were wiped out, restricting the species’ genetic diversity. Today’s remaining stands exist at higher elevations, mostly between 2,000 to 6,000 feet.

By 1892, Hawaiian officials were concerned about water quality. They realized that clearing the forests greatly increased erosion on the watershed, so they established the Bureau of Agriculture and Forestry. And with the help of the Hawaiian Sugar Growers’ Association, in 1903 they created a Division of Forestry to establish forest reserves.

They began by planting new trees on the denuded landscapes. While this was on the right track, they also planted numerous alien species, such as eucalyptus. By the late 1930s, they were planting two million trees a year. By 1940, over 1.2 million acres had been set aside as forest reserves.

The 1980s began an enlightened period of reforestation. From 1980 to 2004, 8,000 acres of koa were planted at Umikoa Ranch on the island of Hawaii. David Matsuura, managing steward at the Hilo-based ranch, states that some trees are now big, but he’s not sure of the quality yet. ”That’s the problem with koa. It’s a very long-term crop.”

At the Hakalau Forest National Wildlife Refuge, northwest of Hilo on the Big Island of Hawaii, 271,000 koa trees have been planted since 1985, with a “70 percent survival rate,” according to Baron Horiuchi, a horticulturist with the U.S. Fish and Wildlife Service.

In 1984, Jean Ariyoshi, wife of Hawaii’s governor at the time, promoted planting 25,000 trees to commemorate the 25th anniversary of Hawaiian Statehood. The following year, she pushed for planting trees for each of Hawaii’s 1,138,000 citizens in honor of the first Japanese to arrive in Hawaii 100 years earlier. Remarkably, this massive planting effort was accomplished in a year and a half.

At Haleakala Ranch on Maui, two stands of koa were planted in 1985 from seeds from the Big Island. Unfortunately, cattle broke through the fence built to keep them out and they cropped the tops of the trees when they were only two or three years old. Nonetheless, the stands survived and much better fences have since been installed. At Haleakala Ranch, planting continues to this day.

In 2015, Paniolo Tonewoods was formed in Maui as a joint venture between Taylor Guitars, of El Cajon, California, and Pacific Rim Tonewoods, just south of the border in Washington State. Paniolo is now working with the Native Nursery in Maui, which grows seedlings for planting and is very much into the science of raising superior trees through various means, including selecting sprouts from the best trees.

In 2015, Paniolo Tonewoods harvested 40 trees at Haleakala Ranch. The results looked promising, so they went for another 500 trees. They topped the stunted tops of the trees and concentrated on the stumps, as the cattle-shortened trunks were dubbed. Care was taken to avoid bruising the stumps as they were toppled. The stumps were quickly rounded up to avoid invasion from ambrosia beetles, which could bore into the logs, and the stumps were shipped to Pacific Tonewoods in Washington for milling. Each stump and each remaining root system was numbered in case some roots sprouted, so that sprouts from particularly nice trees could be selected by the Native Nursery as part of the science of selecting the best candidates for propagation.

At the mill in Washington, each cut plank was numbered, and then assessed for its potential. Taylor had agreed to use all the wood, so it was a matter of grading each piece’s potential. The planks were air-dried, then shipped to Taylor’s El Cajon factory. There, it was necessary to dry them three times until they were stable enough to make into ukuleles and guitars.

Taylor is to be commended for proactively seeking means of securing sustainable traditional tonewoods. Already it has partnered with Madinter, an international wood supplier, securing an ebony producer in Cameroon called Crelicam. Taylor has done the same thing with mahogany in Honduras, partnering with the Copén forestry cooperative and MaderaVerde, a Honduran counterpart to GreenWood, an American nonprofit whose goal is to promote sustainable forestry products. Koa seemed the next logical step in securing sustainable sources of traditional tonewoods.

Martin, among others, has looked into alternative sustainable tonewoods such as cherry, as well as securing adequate sources of traditional woods, including koa. Numerous smaller ukulele and guitar manufacturers are doing their share, too, both in planting koa trees and by committing to using trees that have died or fallen because of wind and other environmental factors.

Joe and Kristen Souza of Kanile’a Ukuleles have reportedly planted a few hundred trees on the Big Island. Jorma Winkler, of Winkler Woods, started Imua Ukuleles with Shinji Takahashi, using fallen koa trees. David Gomes, a ukulele and guitar maker in Hawi on the Big Island, has used salvaged koa logs for over 40 years. Mickey Sussman, of Anahola Stringed Instruments in Kauai, uses fallen koa logs on his property in Kauai and also grows his own koa there. The list goes on and on.

Through a non-profit called Reforest Hawaii, Joe Souza, right, of Kanile`a Ukulele works on planting thousands of koa saplings at his 118-acre ranch on the island of Hawaii.

Nonetheless, with the vast bulk of harvested koa turned into furniture, what’s the point in saving a little for guitars?

Hawaii-based furniture and gift store Martin & MacArthur has been the world’s largest purchaser of koa for over 50 years. In partnership with Hawaiian Legacy Hardwoods Limited Partnership Company, Martin & MacArthur agreed to plant a new koa tree for every item of furniture it sells. These trees are tagged so that they can be located and monitored by GPS by the furniture owners and by donors to Hawaiian Legacy Hardwoods.

To date, over 25,000 koa trees have been planted in what was once King Kamehameha I’s koa forest, north of Hilo on the Big Island. Martin & MacArthur points out that there are now more koa trees in Hawaii than there were ten years ago.

The planted areas are fenced to keep cattle out, but perhaps even more importantly, Martin & MacArthur has pledged never to cut down any koa trees for its furniture. Instead, they use only dead trees or ones that have fallen from environmental effects.

Environmental groups have also jumped on the bandwagon to save Hawaii’s forests. The Sierra Club is a strong advocate, as well as The Nature Conservancy. In The Nature Conservancy’s Kona Hema Preserve, on the southern slope of Mauna Loa on the Big Island, stands the largest known koa tree. It stretches an impressive 115 feet tall, with 9-foot diameter trunk at chest height and a canopy extending some 93 feet over the forest floor. This tree is registered under the National Register of Big Trees. Although koas usually grow for 60 to 200 years, depending on environmental conditions, this one is believed to be over 500 years old. It was a sizable tree when King Kamehameha I was born and when Captain Cook first arrived in Hawaii.

Koa is a keystone species and environmental groups view the preservation and enhancement of Hawaii’s endemic forests as vitally important. The two main canopy trees—koa and ’ohi’a—accomplish so much for Hawaii, providing food and shelter for a variety of birds, insects, and plants, many of which are endangered. It protects watersheds by reducing evaporation with its broad canopy and preventing erosion. It allows the growth of other plants that are shielded from the sun and wind. It is a nitrogen-fixing plant, so it enriches the soil. For those who count the carbon footprint, a planting of 100 young koa trees will offset the carbon emissions of an average family for two years.

For those who aren’t interested in carbon footprints, consider that in the last decade, the value of koa increased 1,000 percent. For the decade before that, another 1,000 percent. Koa is among the world’s most valuable woods. With current reforestation efforts and the use of salvaged wood, it has both a bright future and a bright promise for investors.