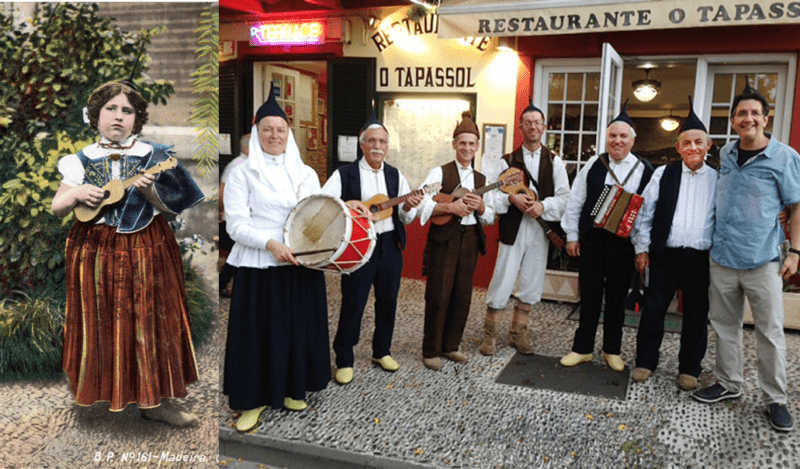 FROM THE WINTER 2017 ISSUE OF UKULELE | BY JUMPIN’ JIM BELOFF

As part of a trip to Spain and Portugal last summer, my wife, Liz, and I decided to include a two-day visit to the Portuguese island of Madeira. A 90-minute flight from Lisbon, Madeira is situated in the Atlantic Ocean southwest of Portugal. The population is a bit more than 250,000, and its seaside capital is Funchal. As it has been for two centuries, Madeira is a tourist destination known for its spectacular beauty, New Year’s Eve fireworks, temperate climate, wine, fruits and vegetables, seafood, and hiking trails. Most important to the readers of this column is that Madeira is also the ancestral home of the modern-day ukulele.

The story has been chronicled in books such as my own The Ukulele—A Visual History, Jim Tranquada and John King’s essential The Ukulele, and others. The short version is that in 1879 the Ravenscrag, a ship carrying 423 Madeiran men, women, and children, arrived in Honolulu harbor. They were escaping poverty and overpopulation back home and seeking employment in the Hawaiian sugarcane fields. Upon arrival, one of the passengers, João Fernandes, jumped onto the wharf and began to sing a song of thanksgiving for the safe arrival of the Ravenscrag. What attracted the attention of the curious Hawaiians was the unusual musical instrument he was playing—a small 4-stringed Madeiran wooden instrument called a machete.

How the machete (also known as the braguinha) eventually evolved into the ukulele we know today is a story for another time. Suffice to say, the tuning changed, and the native Hawaiian koa wood turned out to be especially well suited for a small fretted instrument.

Another 5-stringed folk instrument from Madeira known as the rajão evolved into the taropatch, the 8-string version of the ukulele. The rajão was the instrument we encountered on our first night in Madeira. After dinner, we heard folk music in the old town area of Funchal, where many restaurants are located. Before long we found a group of six strolling musicians playing accordion, percussion, and rajãos. As I watched the rajão players, I noticed that the chord fingerings they were using seemed familiar. The reason for that is the tuning: DGCEA.

After listening a bit and talking to one of the musicians who spoke some English, I had a chance to play a rajão with the group. The song was a simple 3-chord folk tune in the key of C. With the five strings, the C chord was 20003, G7 was 00212 and F was 32010. As I played along, I couldn’t help but smile thinking about the mashup of cultures in 1879 that led to this moment of musical exchange in 2017. Afterward, we all introduced ourselves and I bought their CD (Cantigas da Moda, by Do Grupo De Folclore e Etnografico da Boa Nova) and a carapuça, one of their handmade traditional pointy hats. I’m not sure it will get much wear in Connecticut, but the hats looked great on them! And yes, they knew all about how the ukulele was descended from the machete.

For those who enjoy traveling, put Madeira high on your list. It is a place rich in both beauty and history, and it may also allow you the chance for a fascinating and musical cultural exchange.

Special thanks to Jim Tranquada for his assistance with this column.