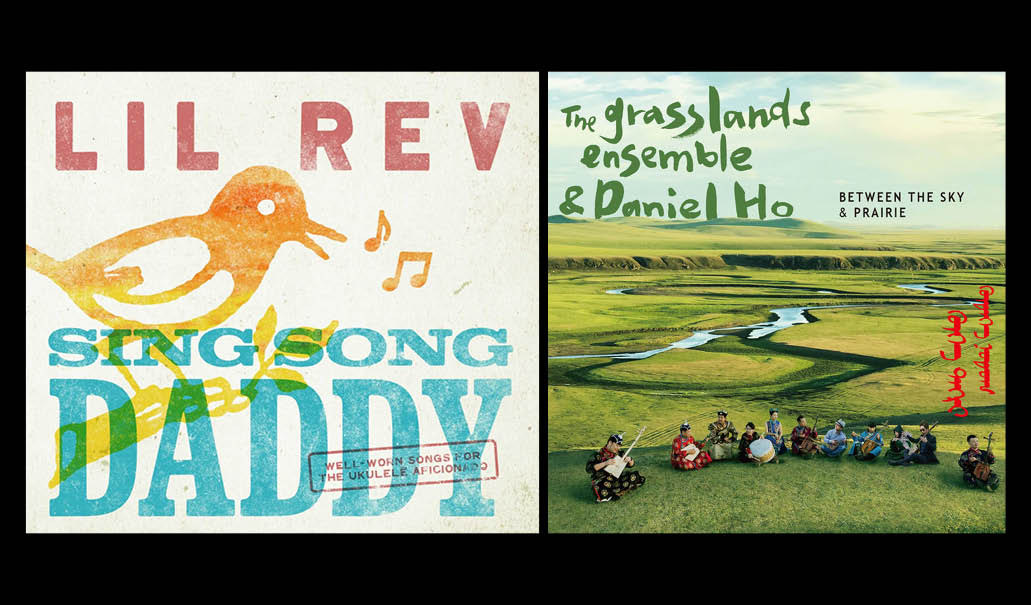 We can live in a ukulele-centric world here at this magazine devoted to the little four-string, focusing on music that sounds made for ukulele players. Lil’ Rev’s latest album, Sing Song Daddy is an album for ukulele players and fans, but it’s also a lot more than that—it’s a doggone good roots record that just so happens to deliver a maximum dose of ukulele.

Like many independent musicians and artists these days, Lil’ Rev reached out to his fan base to raise the money for this album through a GoFundMe campaign. The result is a 15-song disc (or download) of originals penned by the Sheboygan strummer. Many of the tunes find Rev backed by acoustic bass, guitar, harmonica, and other instruments, but everything hangs from a frame of Rev’s deft ukulele picking, strumming, and flailing.

Conceptually, Sing Song Daddy picks up where Rev’s 2011 album, The Happiest Way to Be Sad, left off.  He’s experienced a lot of personal tumult since then and he says the result is a record with more grit and urgency. Life has a way of doing that to you, and it shows on Sing Song Daddy.

For a guy known for his affinity of American roots music, it won’t shock anyone that the Sing Song Daddy drips with American grooves and has bluesy blood flowing through its veins. Structurally, most of the songs fall into basic blues formats and that gives the record a sense of familiarity. I mean this in a good way, because rather than be bored by hearing another blues, you’ll probably be humming the songs on Sing Song Daddy hours later. The opener, “Flip,” is a great example of this—it has a pretty straight ahead format, but imbued with infectious, celebratory energy that just left me feeling good.

The album has four instrumentals, and one of them, “The Old Sheboygan Soft Shoe,” has fancy fingerpicking, spritely triplet strums, and a crisp, snappy tone that helps show why he remains a lasting favorite of players. A resonator ukulele on “Gone to the Ages” helps take advantage of a few greasy slides and chime-y harmonics.

With many books and CDs behind him, Lil’ Rev is obviously a prolific writer and player, and this album stands as one of his strongest contributions to date. It’s filled with hope and a positive outlook in the face of challenges—that sounds like something many of us could use. Let’s hope that people outside the ukulele community discover it and dig Lil’ Rev’s latest record, too. —Greg Olwell

THE GRASSLANDS ENSEMBLE & DANIEL HO
Between the Sky & Prarie
(windmusic.com.tw)

The first thing you need to know about this wonderful new undertaking from Daniel Ho is that it is not a “ukulele album.” Ho, one of the undisputed masters of the instrument, does play prominent uke on several songs here, but he also plays piano on some tracks instead (very nicely, too, in an airy, melodic, George Winston-ish style), and on others his role is as a percussionist, most often using his own Ohana Shakerlele shaker/rattle (shaped like a miniature uke body and held in one hand), or an ipu heke, which is a resonant hollowed gourd often used to accompany hula dancers. Nor is this a “Hawaiian music album.” Rather it is, as the back cover of the package says, “a re-imagined collection of Mongolian music from a millennium,” and the musicians and singers of the Grasslands Ensemble hail from “the inner Mongolian prairies of Hulunbuir.” All but the title piece, which was written by Ho, are traditional folk tunes from that region, arranged by Ho (alone or in collaboration), save for one.

If all this sounds fantastically exotic, well, it is! But don’t be scared off by the origin of this music, or the unfamiliar languages, or the eerie and sometimes guttural throat-singing that crops up here and there. (Perhaps at some point, you’ve heard the most famous throat-singers—at least in the West—Huun-Huur-Tu; they are not here, but Tamir Hargana sounds similarly haunting.) Because there are so many beautiful melodies and sweeping (but always supremely tasteful) arrangements spread across these 13 tracks, if you have an adventurous sonic palette, you will certainly be swept away, as I was.

It’s the wide variety of vocal styles and their arrangement—sometimes simple and straightforward, other times intricately layered and quite complex—that gives these songs much of their character and depth. But the mostly spare instrumental accompaniment plays a vital role, too: Mongolian flute, an indigenous jaw harp called an amen khuur, the two-stringed plucked tovshuur, assorted percussion, and then Ho’s stringed arsenal: a Romero Tiny Tenor uke, a regular tenor, an XS soprano, a “Little Pepe” six-string uke. . . plus a very different Mongolian four-string—a doshpuluur.

The packaging for the album is gorgeous, boasting a fat booklet filled with color photos of Mongolia and the musicians, as well as helpful information about the songs. It’s an aural journey to a land and culture you probably have not given much thought to. But Daniel Ho makes it a trip well worth taking. —Blair Jackson