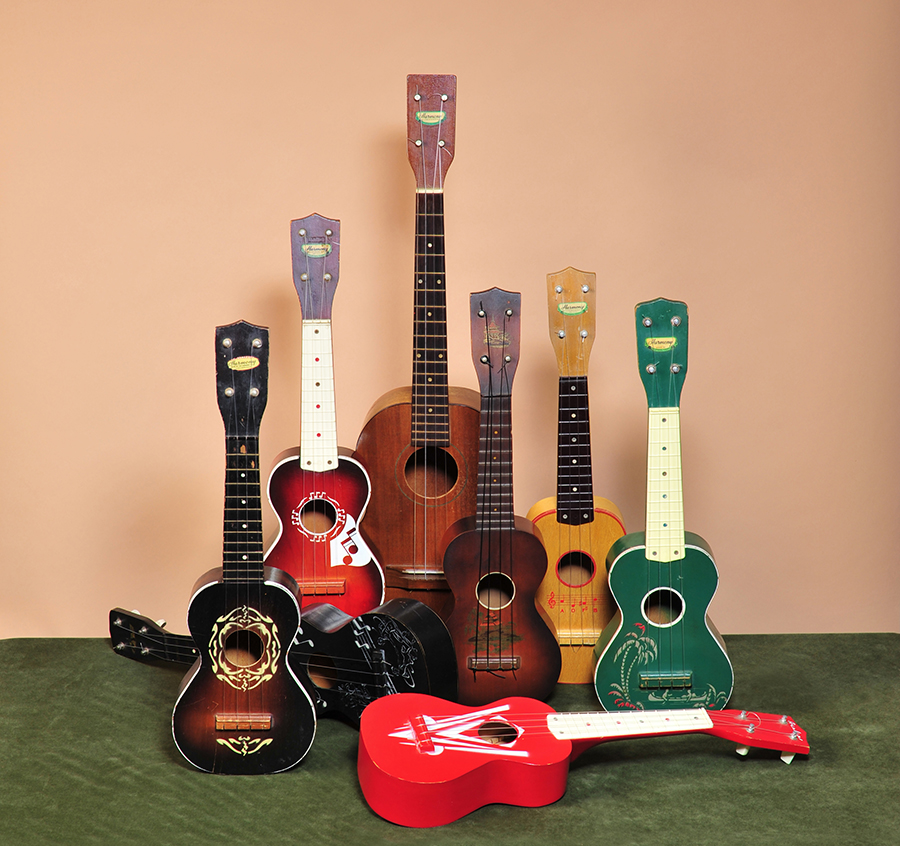 BY SANDOR NAGYSZALANCZY | FROM THE FALL 2019 ISSUE UKULELE MAGAZINE

In the past few years that I’ve been writing the Great Ukes column, folks have asked me what exactly constitutes a “great” uke? Does it have to be fancy, finely crafted, or have some kind of historic value? The simple answer is no, it just has to be interesting in some way. A great example of this are the ukuleles produced by the Harmony Company of Chicago. Most of the ukuleles the company produced were budget-priced instruments with good-to-decent playability that anyone could afford. When most folks think of a Harmony uke, I imagine they picture a cheap painted or stained-whitewood instrument with stenciled or decaled decorations.  But did you know that in its heyday, Harmony was the largest musical instrument company in America, and that, in addition to its inexpensive models, Harmony made top-quality instruments endorsed by some of the finest musicians of the time?

The Harmony story begins with Wilhelm Schultz, a German immigrant who came to Chicago in 1882. Though he had been a builder of cabinets and staircases, he decided to follow his passion for music and got a job building stringed instruments. After acquiring lutherie skills working at Lyon & Healy, a large Chicago-based instrument maker, Schultz struck out on his own, creating the Harmony Company in 1892. Starting with just four employees, Schultz initially built violins and guitars, and then mandolins and banjos. Always mindful of the musical trends of the time, Schultz soon added ukuleles and Hawaiian-style guitars to the production. By 1915, Harmony had 125 employees and became the first large-scale ukulele manufacturer in the country.

One of Harmony’s largest customers was Sears & Roebuck, who sold thousands of Harmony-built ukuleles, guitars, etc. under the “Supertone” brand name through their mail-order catalogs. The Supertone line included both traditional Hawaiian-style ukes made from mahogany and koa, as well as inexpensive models featuring eye-catching decorations, such as the decaled “Drowsy Waters” uke, shown at far right in the photo below. In 1916, Sears decided to up its ante in the ever-growing ukulele market by buying the Harmony Company and thus securing the entire output of instruments. In addition to the Supertone ukes, Harmony built inexpensive ukes for the Sear’s Silvertone brand, including various models with simple stencil-painted decorations—water skiers, canoes, palm trees, and various tropical and fantasy motifs. Harmony also continued building ukes carrying its own brand name, though their headstock labels changed in design several times over the decades.

In the late 1920s, Harmony’s ambitious president, Jay Krause, directed the company to build ukes and other instruments for outside vendors. Any customer requesting 100 instruments or more could contract Harmony to build them. This business was so successful that in the coming decades Harmony bought up many of its competitors and produced their lines of instruments. Thus, lots of Harmony-made ukuleles bear other brand names, including: Airline, Holiday, Kay, La Scala, Regal, Stella, Sovereign, Valencia, and Vogue.

Some of the absolute best ukuleles that Harmony manufactured were the special models created for Roy Smeck and Johnny Marvin—two very talented and popular vaudeville ukulele players and performers. The Smeck signature model was the first of a new line of “Vita” brand instruments which included guitars and mandolins. The Smeck “Vita-Uke” had a distinctive lute-shaped body made from beautiful Cuban mahogany with a spruce top (see Great Ukes, Winter 2016 and UkuleleMag.com). Harmony’s relationship with Smeck continued for many decades, resulting in several other Smeck signature models, including the “Professional Concert Uke,” shown above. The “Johnny Marvin Professional Tenor” uke (which actually had a concert-sized body) came in two models: the regular one (seen here) made from flame grained mahogany, and the “Prince of Wales” model, made from figured koa and featuring gold-plated tuning pegs. Both models were fitted with a patented airplane-shaped “aero bridge,” designed to capitalize on the popularity of Charles Lindbergh’s historic flight across the Atlantic in 1927.

In December 1940, Kraus staged a buyout of Harmony from Sears, moving the company to a larger plant to allow them to expand, although most of that growth was in guitar production: In 1941, they built a third of the total number of fretted instruments made in the U.S., but 75% of that total was guitars and only 10% ukuleles.

The end of WWII saw a resurgence of interest in the ukulele—in 1949, Harmony sold nearly 150,000 ukes. But the American folk revival and the advent of rock ’n’ roll drove Harmony to focus most of its production efforts on guitars—flattops, archtops, and electrics. Between 1945 and 1975, Harmony produced an astounding 10 million guitars—more than any other company in the world.

Ironically, it was foreign competition and Harmony’s commitment to quality that led to their ultimate demise. While companies worldwide built instruments using automated equipment, Harmony’s instruments—even the least expensive models—were built by skilled craftsmen using traditional hand-labor methods. By the mid 1970s, the market was flooded with cheaper instruments, many manufactured in Japan. After 83 years of building quality instruments, the Harmony factory closed its doors in 1975. Fortunately, the legacy they leave behind includes an unimaginably enormous number of ukuleles; some frivolous, some fancy, but all crafted with pride by a company that remains an American legend.