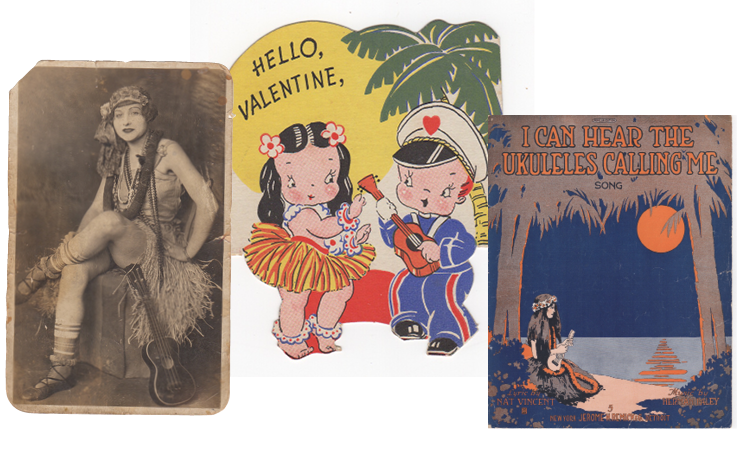 From the Spring 2017 issue of Ukulele | BY JUMPIN’ JIM BELOFF

The collecting fever known as UAS or (Ukulele Acquisition Syndrome) can also extend beyond, well… ukuleles. For some uke aficionados it can spread to all sorts of categories of collecting. This can include paper treasures like vintage sheet music, songbooks, magazine covers, greeting cards, advertising, menus, and photos, and move on to bulkier items like vintage hula nodders, Hawaiian shirts, and even pineapple crates. Pretty much anything with an image of a ukulele or just the word itself is a candidate for the archives.

One thing I learned early on in my collecting days was that the ukulele was so accepted in its first two waves of popularity that it found its way into every nook and cranny of mainstream culture. In fact, during one heyday, it was not uncommon to find movie stills with cast members cavorting with ukuleles, while never touching one in the actual film. What this bit of false advertising suggests is that the ukulele had become a form of visual shorthand, implying that the film was a comedy, had songs in it, was based in Hawaii, or even all three at once.

The ukulele was also a central piece of visual vocabulary during the golden age of Hawaiian tourism. The classic image of someone playing the ukulele underneath a palm tree was employed in countless ways to help sell a romantic and exotic destination. In the late 1930s, when the Matson cruise ships were traveling regularly between California and Hawaii, the dinner menus featured a series of five different covers by California illustrator Frank McIntosh. The menu cover on the final night before arriving in Hawaii featured a multicolored illustration of a ukulele surrounded by tropical fruits and flowers. It’s still relatively easy to find the original menus today because so many passengers chose to save them.

When I found a Martin tenor ukulele in 1992 at the Rose Bowl Flea Market in Pasadena, California, it lit a fire that stills burns bright today. Over the years, my wife Liz and I have enjoyed countless hours scouring flea markets, antique shows, and estate sales for ukulele-related items. We’ve justified this pursuit by using many of the images in our books, including The Ukulele: A Visual History and our Jumpin’ Jim’s ukulele songbooks. For those who know our Daily Ukulele songbooks, virtually all of the photographs of people holding ukuleles were found by combing through old boxes of photos at paper shows or on eBay. As Liz was laying out the book she would often wonder if the people in these old photos would ever be recognized. Lately it’s begun to happen. In just the last six months, players in three of the photos have been identified.

Before I close, I’d like to give a shoutout to one of the great collectors of ukulele ephemera. At the early uke fests of the current third wave, Bob Cuoco would display huge notebooks full of paper ephemera that he had collected over the years. One notebook in particular featured hundreds of vintage uke-themed postcards. Eventually, he reached a point where he no longer wanted to care for the collection and offered to sell much of the archive to us. Our UAS kicked in and we jumped at the chance to merge his collection with ours. And now, we’re sharing some of it here. I like to tell people to be careful what you find at flea markets. It can change your life! So be warned, viewing some of these items might just ignite your own UAS. Happy hunting!

Vintage postcards and photos featuring people with their ukuleles can be found  at paper shows and on eBay.

A menu from the Matson cruise lines, and a Dole pineapple crate are examples of some of the Island-related treasures in our collection.

Over the years, the ukulele has been used regularly as a prop on magazine covers, valentines, and in advertisements.

This Islander plastic ukulele was a gift from Maria Maccaferri, wife of Mario Maccaferri, who designed and manufactured the Islander and other plastic musical instruments in the 1950s and 1960s. The painted illustration was by Carrie Singhi, sister of May Singhi Breen, arranger of many ukulele songbooks from the 1920s and later.

Another category of ephemera is vintage ads for ukuleles.

There have been dozens of songs published with “ukulele” in the title. The sheet music to these songs often features beautiful and dramatic covers. We also collect sheet music that shows someone playing a ukulele on the cover.