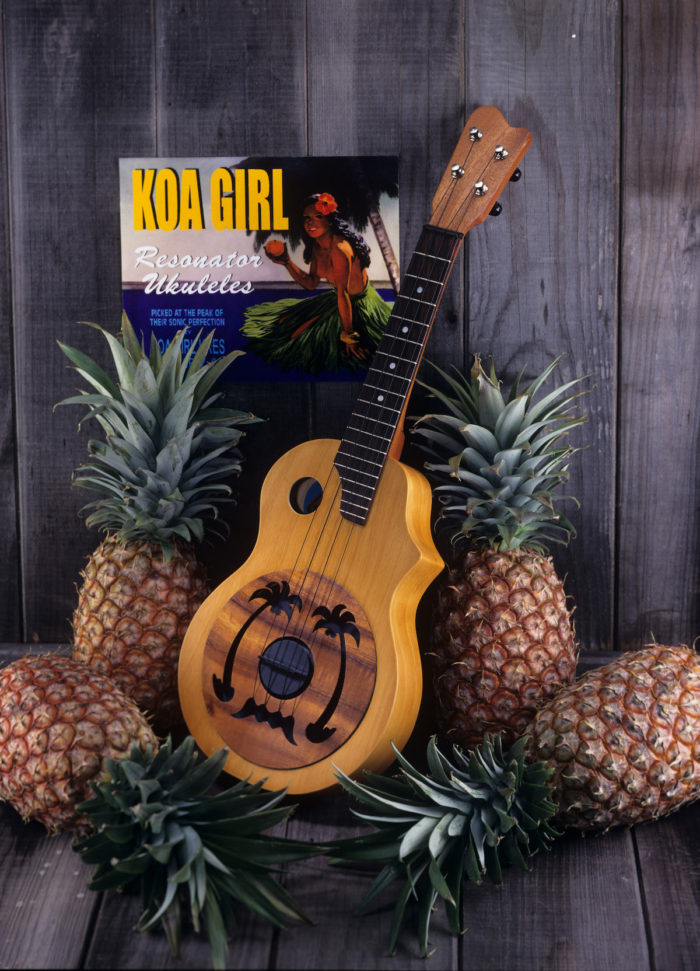 The Resonator Uke That Never Came to Be

Text and Photos by Sandor Nagyszalanczy

After playing and collecting ukes for about 15 years, I had developed a particular fondness for resonator ukes. They’re just so loud and proud sounding! The only trouble was, I didn’t have one and there weren’t too many around. I’d played a couple of lovely vintage resonators, but a purchasable instrument had thus far eluded me. (I once had the chance to buy a National and a Dobro from Norman’s Rare Guitars in Tarzana, California, but lacked the necessary funds).

Uke Tales is an exploration of ukuleles with an interesting story or connection, or that are just a lovely instrument.

Unlike regular ukes (and guitars, mandolins, etc.) that get their volume from the strings acoustically amplified by a wood top attached to a hollow wood body, resonator instruments achieve their loudness via an internal pie-plate-like thin metal cone, much like a loud speaker. The strings sit atop a bridge that directly transmits vibration to the cone(s), which in turn, amplifies the sound. Resonator instruments were first developed in the 1920s, out of the need for instruments loud enough to be heard alongside the brass, horn, and woodwind sections of bands and orchestras (marketable electric amplification wouldn’t be developed until the mid-1930s). The National String Instrument Corp. was the first to manufacture metal-bodied resonator guitars, and metal resonator ukes followed in 1928. Somewhat mellower sounding wood-bodied Dobro brand resonator ukuleles first saw production a few years later.

Since vintage resonator ukes were both rare and expensive, I had an idea: Why not build my own wood-bodied resonator uke? Although I had no previous lutherie experience, I had an ace in the hole: I was close friends with Michael Dresdner, a renowned luthier who, at various stages of his career, manufactured high-end bass guitars for Ken Smith, worked as an instrument designer for Martin Guitar, and had helped to start the Tacoma Guitar Company. I pitched my uke idea to Michael, and he liked it enough to commit to the project.

After I came up with the instrument’s basic body shape, Michael made an interesting suggestion: Instead of bending the sides of the instrument and gluing them to the top and bottom, why not make the back and sides from a single piece of wood, using a modern automated CNC (computer numeric controlled) router to cut the body’s outer shape and create its hollow interior? This “nut bowl” manufacturing technique would make the ukes a lot easier to build, and since the resonator cone was responsible for amplifying the strings, the single-piece body wouldn’t negatively affect the instrument’s sound.

The result of my collaboration with Dresdner was the “Koa Girl” resonator ukulele. Its body was routed from a 2-1/2” thick chunk of Alaskan yellow cedar surmounted by a spruce top. For the cone, we used the same kind of thin, spun-aluminum cone as found in tricone resonator guitars. We used a laminated koa wood cover plate, with a cutout design of palm trees and surf, laser cut by custom instrument component supplier and luthier Michael Gurian. The uke’s neck, also CNC-shaped from mahogany, was secured to the body with wood screws. Just for fun, we pasted a small photo of a contemporary hula dancer inside the body, visible through the Koa Girl’s small sound hole.

After our first prototype was finished, I took the promotional photos you see here (bonus: I had lots of tasty pineapples to eat afterwards). Then, Michael and I headed off to the 2000 NAMM (National Association of Music Merchants) show in Los Angeles. The idea was to present our prototype to potential dealers and, hopefully, walk away with some orders. In reality, the new wave of the “uke craze” was just getting under way, and while the dealers seemed impressed with our little instrument, they really weren’t sure that the musical world was champing at the bit to buy new resonator ukes.

We did come away with some great compliments for our Koa Girl: Resophonic instrument virtuoso Bob Brozman performed some of his incendiary strums and runs on our Koa Girl, and said he thought it had good potential; he suggested swapping the plastic saddle for one made from maple. We also received high praise from Don Young, one of the founders of National Reso-Phonic Guitars (re-formed in 1989) who had also recently begun producing resonator ukes. After hearing the Koa Girl, Don said “I wish ours [wood-bodied resonator] sounded as good.” He might have just been being kind, but damn, our Koa Girl did sound good: clear, loud, and warm.

After striking out on writing orders for our new uke, Dresdner and I quickly lost interest in the project, as we both had busy lives and many other irons in the fire at the time. In addition to having some fun memories from the NAMM show (we first met Jim and Liz Beloff there, who were debuting their new line of “Fluke” ukuleles), we also ended up with a pile of components for Koa Girls that were never built—maybe enough for 8–9 ukes…anybody interested?

Sandor Nagyszalanczy is a regular contributor to Ukulele Magazine and a woodworking expert, an avid ukulele collector, and Creative Director and Emcee of the Ukulele Club of Santa Cruz.