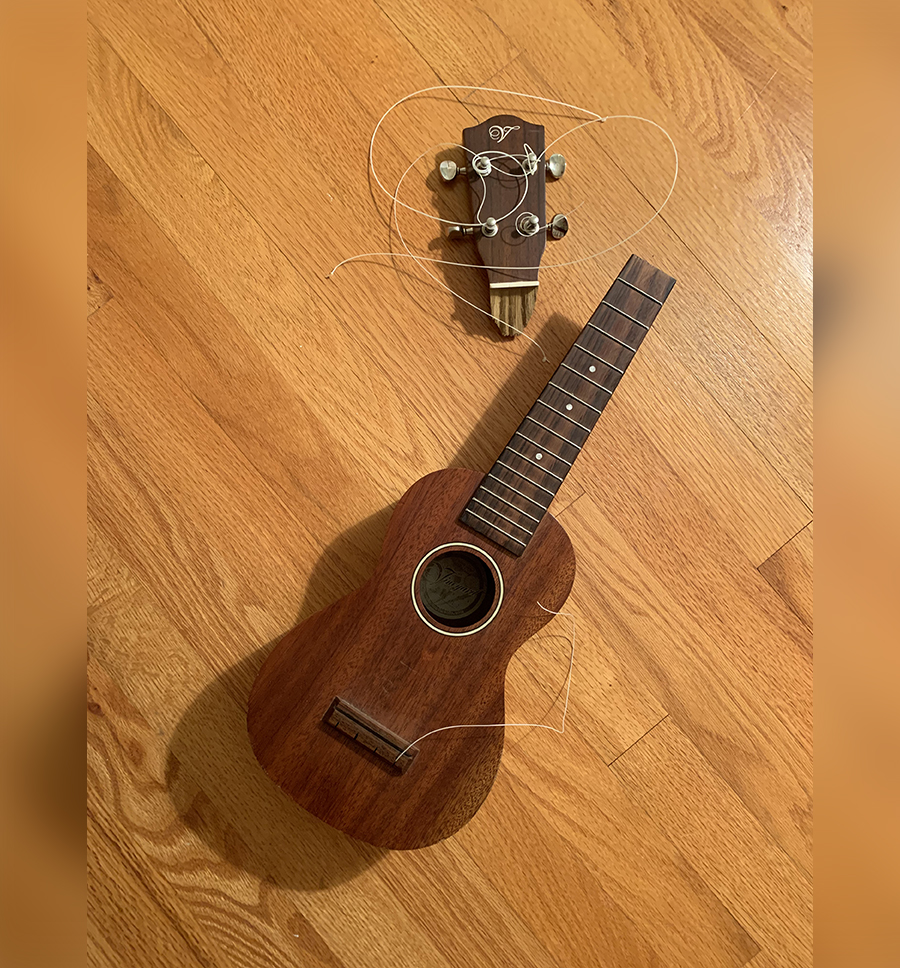 BY EDDIE SCHER | FROM THE SPRING 2020 ISSUE OF UKULELE

I tend to fall apart alone in hotel rooms. Some combination of boredom, endless TV, and not sleeping much has always made business travel a challenge for me. Or it did, until about 12 years ago, when I discovered the ukulele.

I bought my first uke online—an inexpensive Vineyard soprano. It didn’t sound amazing, but it sounded just fine. Nor did it play great. But it played just fine. It arrived while my wife and kids were away visiting family and, after years of work getting my guitar chops together, it was a pure and freeing experience. No machismo here. For the first time in many, many years, I simply strummed tunes I loved and sang.

From then on, that Vineyard came with me: tied to a backpack on epic hikes through the Sierras, bungeed on whitewater rafts, cinched up in a motorcycle saddle bag, stuffed into a courier bag for trips across Europe and Central America, and with a sock over the headstock so it stuck out like a golf club. How amazing to play music around a campfire at 10,000 feet or for the security guards (who asked) at Nadi airport in Fiji. That Vineyard featured scratches and scars from when a gust of wind sent it scraping down a glacier, where it swam in the Yellowstone River, and the time it nearly drowned in beer at the Bottom of the Hill club in San Francisco.

I’ve owned ukes that were too precious: I once found a friend’s toddler walking around with my koa Collings—by my panicked reaction I knew that uke wasn’t for me. In retrospect, I kind of wish he had dinged it. Like new sneakers, sometimes the first smudge is a favor. I love vintage instruments, and they always come with patina. Someone once told me, “Never worry—anything built of wood and glue can be repaired with wood and glue.”

That’s one reason I never minded the various holes I had drilled into the Vineyard for different, mostly unsuccessful, attempts at installing pickups and microphones. Or the ugly replacement Grover geared tuners that stuck out like ears from the headstock. Wrong on a soprano, yes, but a big improvement in tuning.

The greatest thing about an affordable instrument is the worry-free travel. And I took that Vineyard everywhere, including on a recent ill-fated trip to Washington, DC. It was a last-minute grab on the way out the door to the airport, headstock once again poking out of the top of my bag. No more awkward evenings; I was always happy to arrive back in my hotel room, ignore the TV remote, and get back to work on an arrangement of Scott Joplin’s “Maple Leaf Rag.” After three nights I had nailed the first two sections.

The next part of my trip took me to Philadelphia, where I would have a few more evenings to work on the remaining two sections. On the crowded DC subway, someone asked about my mandolin. At Union Station, I queued up for the train, then joined the rush for a seat. It’s a reserved train, so even though it feels a little like a 1970s Who concert, there’s a seat for everyone. But in the heat of the moment and feeling the pressure to secure the best possible seat, I climbed aboard the train too soon. Then, as I reversed course to deboard and try a different car, those Grover ears grabbed and locked themselves into a steel handrail.

The torque must have been pretty incredible as I moved forward, then back, and twisted to turn around. I felt nothing but a slight pressure from the strap of the bag. But everyone on the train, despite the considerable noise of shuffling and loading, heard the crunch of twisting, splintering wood. The sound was unmistakable, and I immediately knew exactly what it was. So I wasn’t surprised, only sad, collecting the headstock that now hung by the strings as a trainload of confused commuters looked on.

That was in Spring of 2019, around the same time that Ukulele magazine published a great article about traveling with ukes. Since then I’ve replaced the Vineyard. Instead of going with a special “travel” ukulele, I went with an old Martin Style 0 with enough patina, including scrapes and repaired cracks, to make it affordable. This time, though, I paid much closer attention to the case. And now I’m using it.