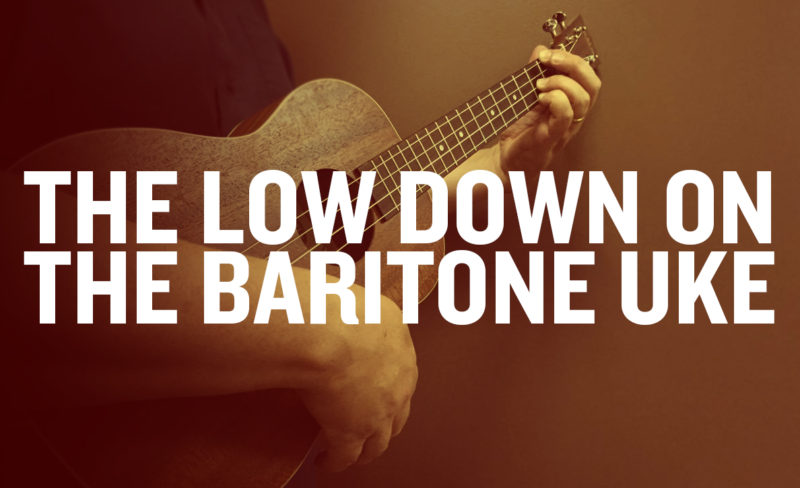 From the Summer 2017 issue of Ukulele | BY JUMPIN’ JIM BELOFF

The bari is back! Based on scant scientific data, I’m going to go out on a limb and say that interest in the baritone ukulele is heating up. Just from personal observations at recent uke fests, I’ve noticed more and more attendees showing up with baritones in tow, organizers are featuring more baritone workshops, and instructors are often rocking a bari at some point during their concert sets.

Much of this enthusiasm for the biggest member of the ukulele family can be attributed to its tuning. Typically, the baritone is tuned DGBE, exactly like the top four strings of a guitar and a fourth down from the more common GCEA tuning. Unlike the typical GCEA tuning, the baritone is tuned low to high—in other words, the baritone ukulele is not re-entrant. For guitarists, it’s an easy transition into the uke world. For performers and singer/songwriters, the bari may be a welcome alternative to the higher-pitched C-tuned uke and more suitable for thoughtful material.

While working on the baritone version of the Daily Ukulele: Leap Year Edition last year, I had a chance to test drive the bari with all kinds of popular songs from the 1950s, ’60s, ’70s, and beyond. The chords in pop songs get more exotic in the late 1960s and 1970s and it was interesting to hear how they sounded in DGBE tuning. Sometimes I found that the sound of certain chords on the bari wasn’t working for me. Take the E minor 7 chord, for example.

The commonly accepted way to make an Em7 on a bari is all open strings (Figure 1). Unfortunately, in context, moving from a fingered chord to all open strings on a bari can sound muddy and unfocused, even wrong. Thus began the hunt for a replacement. A second-position Em7 (Figure 2) can be hard to finger quickly. After much experimenting, I settled on the shape in Figure 3 for many of the songs that required an Em7. It’s easier to make than the shape in Figure 2 and sacrificing the B note (or 5th) of the chord didn’t lessen the impact. In fact, sometimes it sounded better, especially if the missing note in the chord was supplied by the melody.

I have written about how the rootless “Hawaiian D7” chord often sounds better in context than the traditional barred D7. Of course, personal taste comes into play here, but all of this suggests that the ukulele can tolerate a good deal of experimentation, especially with chord voicing. One last thought on Em7 was that on some songs, simply playing the one-fingered E minor (Figure 4) was the best substitute of all. Similarly, sometimes the typical baritone B minor 7 chord (Figure 5) sounded weak on certain songs and the fuller sounding B minor (Figure 6) was a better choice.

The bittersweet major-7th chord was widely used in 1970s pop songs and played an essential role in the music of songwriters Burt Bacharach, Carole King, Todd Rundgren, and Laura Nyro. When arranging their songs for the bari uke I often came up against the Cmaj7 whose first position shape (Figure 7) is a bit of a “knuckle-buster,” as Lyle Ritz might say. The second version, seen in Figure 8, is easier to make but requires a jump to the fifth fret.

Figure 9 is variant of that shape, but either of these fifth-position chord shapes can sound out of context when surrounded by first-position chords. Figure 10 and Figure 11 are two easy-to-play substitutions that reduce the number of notes in the chord, making these two shapes suggestions of a Cmaj7, rather than the full chord. Fig. 10 maintains the major 7 (B) but loses the root, while Fig. 11 keeps the root (C) but loses the major 7. Once again, on some songs these easier variants actually sounded better.

Because we only have a maximum of four notes to represent any chord on the ukulele, we can’t help but experiment with ways to best capture the essence of any chord in an arrangement. By contrast, think about a piano player who has the luxury of ten fingers to spell out lush-sounding chords. If there is any larger lesson here, it is to keep an open mind on ways to make chords. Often there is an easier way to finger a difficult chord that may sound even better than the traditional way. That’s what makes it all fun, challenging and utterly, uniquely ukulele!