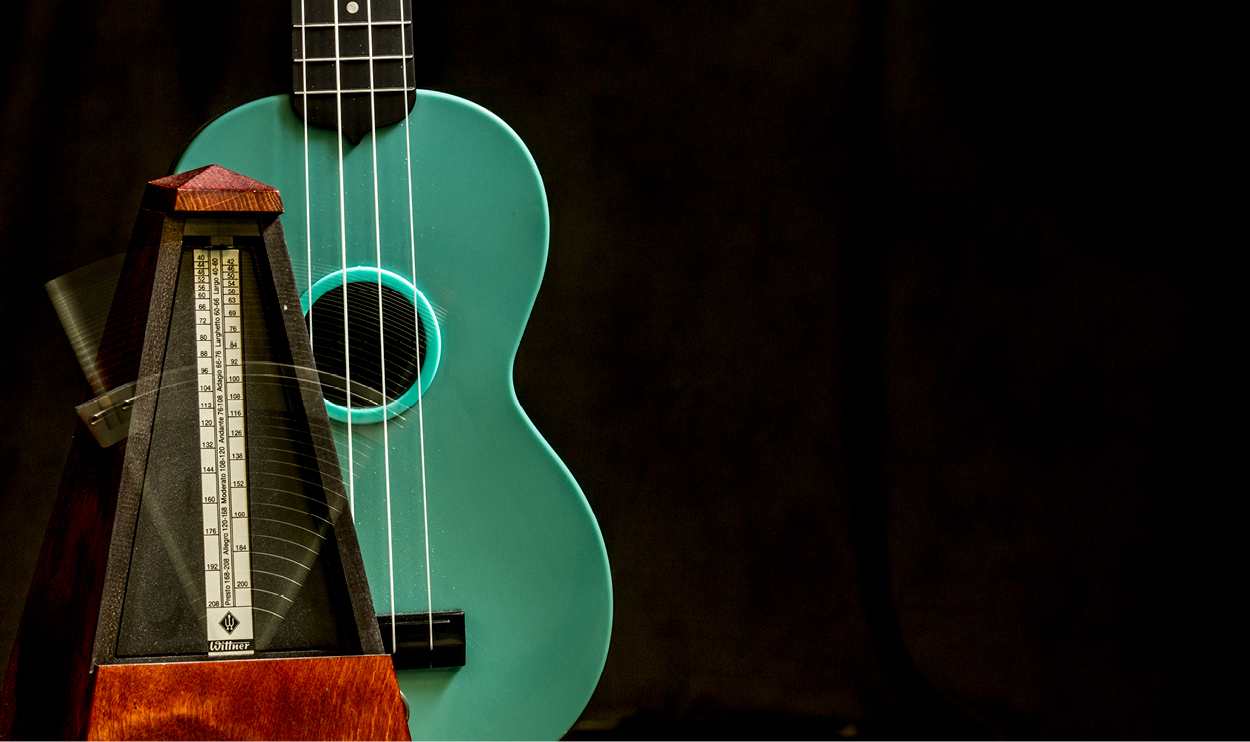 Get Great Time: How to Use a Metronome—and Enjoy It

BY ADAM PERLMUTTER | FROM THE SUMMER 2018 ISSUE OF UKULELE

The metronome produces mixed feelings among musicians. Some find the audible clicks delivered at evenly spaced intervals essential to cultivating their time feel, while others think it makes them overly mechanical; some discover it bolsters their rhythmic confidence, while others see it as ego-crushing.

However you feel about the metronome, spending some quality time with one will not hurt. In this lesson, you’ll explore a variety of ways to work with one, so that whether you’re working on another lesson in this issue or learning a new song for a meet-up, you can love your timekeeper.

Since your non-chording hand is the source of your rhythm, all of the examples use basic open grips so we can focus on your picking and strumming hand.

Start your metronome exercises in a nice and easy way. Set that timekeeper to a slow tempo, like 72 beats per minute, hold down a G chord, and strum in straight quarter notes, one strum per click (Example 1a). Pay close attention and make sure that you’re strumming in exact synchronicity with the clicks, which are marked in notation with Xs, for visual reinforcement. The goal here is to play so perfectly that the metronome’s clicks seem to disappear. If you really want accurate feedback about your timing, record yourself. Make a game of it by edging up the metronome, a few beats at a time, until the train comes off the tracks. Once that happens, slow back down and practice until you can strum confidently at top speed.

Example 1b adds an F chord so you can work on transitions between chords. Start at a tempo that allows you to switch chords without slowing down as you transition between measures. As before, slowly increase the metronome setting as you gain confidence, working up to an impossibly fast target tempo.

It gets a little trickier with note values other than quarter notes. Try Example 2a, with straight eighth notes—two per beat, and Example 2b, with a mixture of quarters and eighths. The key in these examples is to make sure that your strums are lining up exactly with the clicks and that you’re playing the eighth notes evenly.

Example 2c adds a little syncopation. Here, the third beat/click of each measure is met with silence from the uke. Again, slow practice with the metronome should help you approach this pattern with competence, as will playing it with a constant down-up strum, even when you’re not striking the strings—see Daniel Ward’s strumming lesson to learn how.

Of course, quarter notes aren’t the only way to set your metronome. Try conceiving of the click as being in half notes, for cut-time pieces (counted as two half notes per bar, rather than four quarters). To play Example 3a, first put down your uke. Set your metronome at 60 bpm (or half note=120), and start by counting—2 and 4 on the clicks, and 1 and 3 in the spaces between the clicks. Once you’re feeling it, add the strums on 2 and 4, as shown in Ex. 3a.

As you can see in the notation for Example 3b, you’ll be strumming on the beats without metronome clicks—a quarter note on beat 1 and a pair of eighths on beat 3. Don’t feel badly if you have to set your metronome at a slower tempo than you did for Ex. 3a. It’s all part of the game—practice slowly and intentionally so you can play fast and effortlessly.

While Exs. 3a and 3b used the metronome to keep time in half notes, your last examples move in the opposite direction. Set the metronome to click in eighth notes, and go way slow at first. The technical term for this kind of exercise is subdivision—the metronome is defining time in a unit smaller than the basic note value (here, the quarter note).

In this case, subdividing will help train you to play 16th notes with precision. If you glance through the Xs in Example 4a, you’ll see that they provide a pretty clear picture of where the 16th notes—two per click—fall. You know the drill: Now strum the pattern, at a microscopically slow pace if needed, and work it up to a livelier tempo.

By adding ties to the notes, Example 4b is our trickiest pattern yet. To start learning it simply, we will first try the example without the ties, using a low metronome setting. So instead of silence, there will be a strum on beats 2 (click 3) and 3 (click 5) of each bar. After you’re comfortable with that, play Ex. 4b as written, with the ties. Then, when you can strum through it with ease, try halving the metronome setting so that there are four clicks per measure.

Don’t have a metronome yet? Shop for one online with Amazon or Sweetwater.