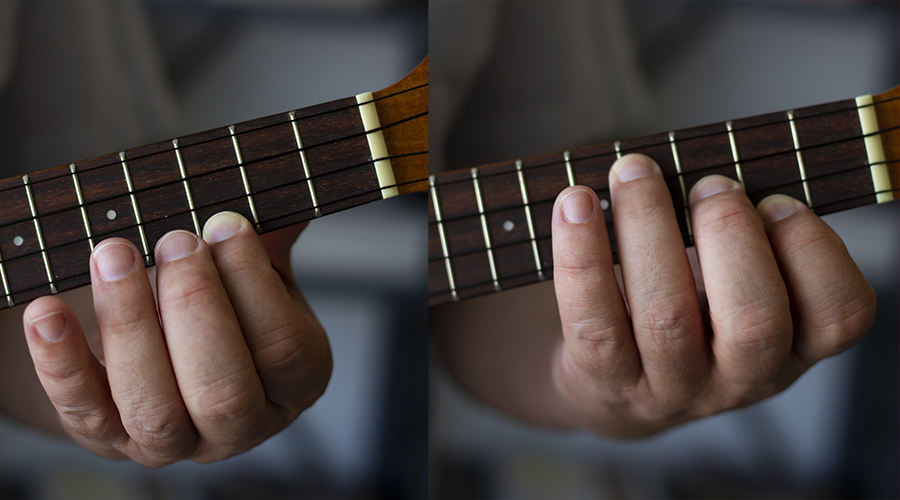 Lesson: How to Transition Easily Between Chords on Ukulele—and Notate Them Efficiently

BY BYRON YASUI | FROM THE WINTER 2019 ISSUE OF UKULELE

The smoothest fretting-hand movement from chord to chord in ukulele playing relies on the most logical fingerings of chords. Since most chords can be fingered in more than one way, players have to be open to using alternate and sometimes unconventional fingerings. To facilitate the following discussion, grip numbers, instead of traditional chord diagrams or frames, will be used to describe chord shapes.

There are several advantages of this form of notation: Creating a grip by hand is as easy as writing numbers, whereas drawing a chord diagram—or even inputting one in notation software—can be more labor-intensive. Compared to a chord diagram, a grip takes up little space on paper and easily allows for alternate fingerings of the same chord shape.

The grip is a set of four numbers, arranged horizontally to represent—from left to right—fret numbers on the G, C, E, and A strings, respectively. The number zero indicates an open string. Grips are placed above or to the right of chord symbols (wherever is most practical, space-wise) and need only be included to accompany the first appearance of any unfamiliar chord symbol, as shown in Example 1. When a grip includes one or more double-digit fret numbers, all of those numbers are separated by hyphens, to avoid confusion (Example 2). Otherwise, hyphens are not needed.

In a grip, when a single finger number appears over two or more different strings, a barre is implied, as in Ex. 3, where finger 2 forms a partial barre on the first chord, and finger 1 or 2 forms a full barre on the Dm7.

Smooth chord transitions are characterized by minimal fretting-hand movement, with no interruption of tempo and no break in sound. In order to achieve this effect, 1.) avoid lifting your fingers off the strings if at least one slider (a fretting finger that moves from fret to fret on the same string) is available and 2.) if possible, use a stationary finger, i.e., one that remains fixed on the same fret and string in successive chords.