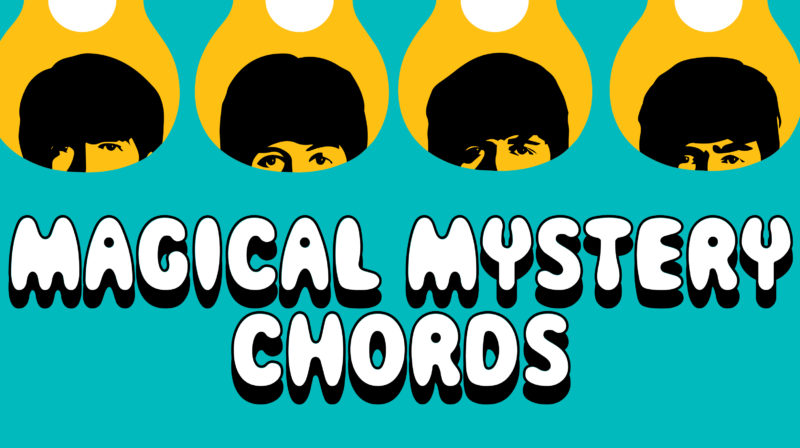 From the Summer 2017 issue of Ukulele | BY JIM D’VILLE

When John Lennon and Paul McCartney began writing songs together, they started with the chords of the major scale, most specifically the familiar I–IV–V (or V7). Their influences were based on the American rock ‘n’ roll, blues, and rockabilly music they heard in their youth, by artists including Buddy Holly, Little Richard, Chuck Berry, and the Everly Brothers.

The chords of any major scale are as follows: I, ii, iii, IV, V, vi, and vii (dim7). In the key of C, the resulting diatonic chord sequence is: C major, D minor, E minor, F major, G major, A minor, and B diminished 7.

These chords are the starting point.

The Beatles’ music began to evolve when the primary songwriters, Lennon and McCartney, started using more complex, extended chords and non-diatonic chords (chords not found in the major scale). When the sentiment of the lyrics perfectly matches the emotional value of the chords is when the musical magic takes place.

By the end of their musical collaboration, after just 12 years, Lennon and  McCartney were considered by many to be the most successful songwriting team in history, penning nearly 200 songs, which sold over 600 million units. Play the following examples and hear for yourself how an extra note can extend a chord into a more complex emotion, or how a non-diatonic chord thrown into a progression can turn a ho-hum, run-of-the-mill song into pop gold.

“Hey Jude” is the biggest hit in the Lennon–McCartney catalog. The magic of the song is not only its simple I–V progression, but the V7sus chord, which falls on the lyric “song.” Strum through the beginning chords of the song in the key of F, humming the melody or singing the lyrics. (I) Hey Jude, don’t make it (V) bad. Take a (V7) sad (V7sus4) song (V7) and make it (I) better. Notice how bad and sad fall on the V and V7 chords. Good things do not often happen on the V/V7. Simply by adding one note to the V7 on the word “song” gives us hope that things will, indeed, work out. This is how to get the personality of an unfamiliar extended chord into your ears: find a song in which it plays a starring role.

For years, people argued about the first chord George Harrison played on “A Hard Day’s Night.” The great chord in question turns out to be an Fadd9. It may sound complicated, but we uke players can hold it with a mere one finger! “A Hard Day’s Night” is a great example of taking a basic IV chord (F), adding one color tone to that major chord and completely defining the personality of the song. Play this song over and over and you’ll never forget the sound of the wonderful Fadd9 chord.

The relative minor of each key can be found by building a chord off the sixth scale–degree. In the key of C, the vi minor is A minor. Ringo’s underwater opus (with an assist from George Harrison), “Octopus’ Garden,” is a fabulous song for getting the sound of the I–vi cadence in your ears. The verses of the song are the standard doo-wop progression, I–vi–IV–V, but it’s the chorus of the song that I find so fascinating. Simply by dropping the I chord out of the progression, Ringo utilizes the remaining three chords found in the verse in the same order to create a completely different sounding chorus. A dandy trick indeed!

The plaintive, thought-provoking lyrics of “Nowhere Man” are paired with a simple I–V–IV–I (C–G–F–C) progression followed by a lamenting IV–iv–I (F–Fm–C) return to the tonic chord. The descending V–IV–I and IV–vi changes are essential chordal changes, so associating this chordal movement with such an iconic song solidifies the emotional value of the chords in our ears. In the A part of the song, our ears are lured into the heartrending tome of a disconsolate soul. But John and Paul aren’t satisfied with that subtle manipulation of the listener. In the B part, they hit us with the emotional knockout punch of the iii–IV change repeated three times (for maximum effect). They complete the masterpiece with the most popular of popular chord sequences, the ii7–V7. Couple these fantastic chord changes with the haunting lyrics and you are exposed to the beauty of not only each individual chord but the relationship they form when paired with other members of the diatonic chord family.

How would you feel if you were making a boatload of money and the government came to you and said they were taking 95 percent in taxes? You’d probably feel like a #9 chord. George Harrison penned “Taxman” in response to this supertax imposed upon The Beatles by the UK government. This is one tension-filled song. It starts on a I7 and as soon as we get to the word “taxman,” the addition of one note magically transforms the I7 to a very dissonant I7#9 perfect for yelling “Taxman!”

Lennon and McCartney wrote some fab endings, especially in the early years. How about that I6 chord at the end of “She Loves You!” One of my favorites, however, is the coda of “Tell Me Why.” The first thing to do if you’ve never heard the end of “Tell Me Why,” or don’t remember it, is to listen to the recording! Hum along with the ending a number of times, so you can hum it back from memory. Now, play the last line of the chorus and into the bridge. (I) Tell me whyyyy (vi7) yyyyy you cry (iim7) and why you (V7) lie to (vi7) me. Coda: bVI7–V7sus–V13–I. Now that’s a Beatles ending!

Music educator and facilitator Jim D’Ville is on a mission to get ukulele players off the paper and into playing music by ear. Over the last six years he has taught his “Play Ukulele By Ear” workshops in the United States, Australia, and Canada. Jim is the author of the Play Ukulele By Ear DVD series and hosts the popular Play Ukulele By Ear website.

Play along with The Beatles with The Beatles for Ukulele! Unlike many books of this type, each arrangement in this book includes every measure of the song, as it was originally recorded—nothing is left out. And when you come to instrumental sections, the chords are provided so you can keep strumming your uke.