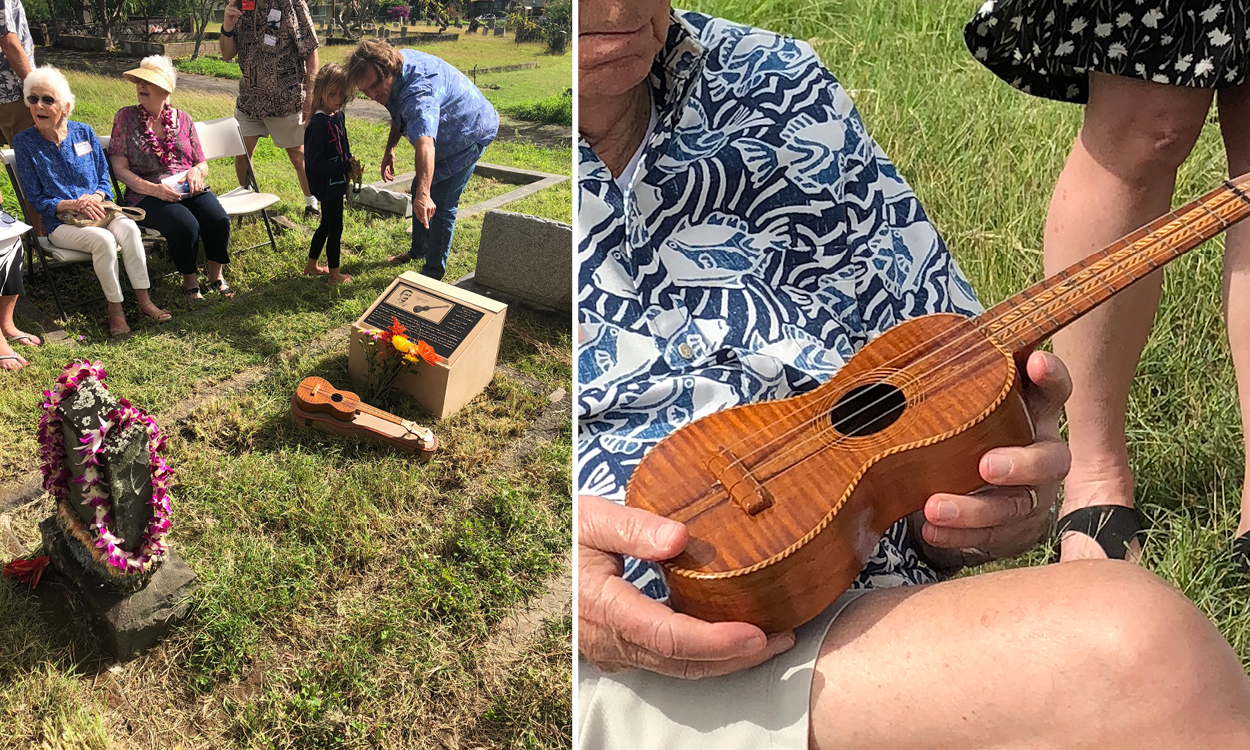 After more than 100 years of tropical weather in Honolulu’s Makiki Cemetery, the inscription on the gravestone of Augusto Dias is barely legible:

That’s why a group of 35 Dias descendants gathered in early January to celebrate a new grave marker that pays tribute (in English) to Dias, one of three 19th-century Madeiran immigrants credited as the first ukulele makers.

The bronze marker, designed by great-great-great grandson Scott Bains-Jordan of Rocklin, California, features a Donelle Nunes portrait of the mustachioed Augusto, an image of one of his ukuleles, and an inscription acknowledging his contributions to ukulele history. Dias’ fellow ukulele luthier Manuel Nunes (1843–1922) is buried in Honolulu’s King Street Catholic Cemetery; the final resting place of Jose do Espirito Santo (1850–1905), a sometime partner of Dias, is unknown.

As they gathered by the grave for an informal celebration and to talk story, the cousins reverently handed around the only Dias ukulele remaining in the family: a spectacular flamed-koa soprano made in 1894 for Augusto’s oldest grandson (top photo). With modern mechanical tuners and some careful repairs, it is still playable and possibly the only Dias ukulele left still capable of making music.

This five-string rajão is one of the few remaining Dias instruments. Photo courtesy of the Bernice Pauahi Bishop Museum, Honolulu.

After the cemetery gathering, a smaller group visited the Bishop Museum, where they were allowed behind the scenes to see two Dias ukuleles in the museum’s permanent collection: an elaborate five-string rajão, circa 1889, with a handwritten label, and an early soprano that was appraised on the PBS show Antiques Roadshow in 2010, and subsequently donated to the museum. It was a rare opportunity—to date, only 12 Dias instruments have been identified.