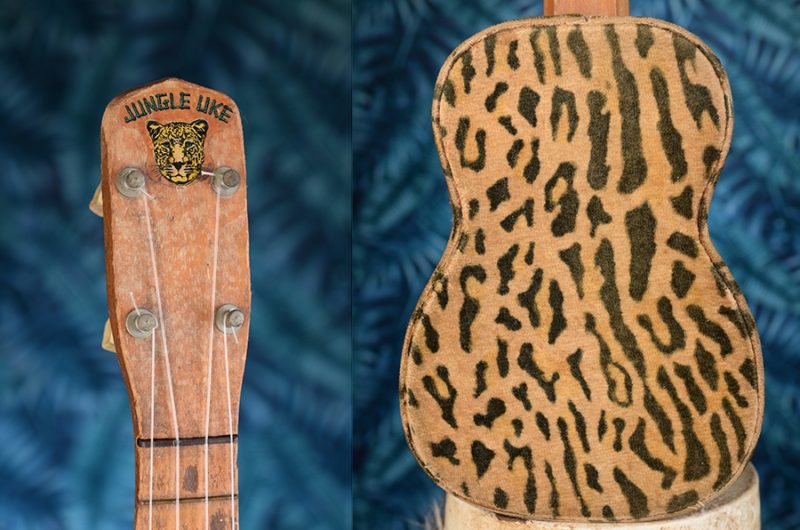 BY SANDOR NAGYSZALANCZY | FROM THE FALL 2021 ISSUE OF UKULELE

While researching my article on ukulele patents, I was impressed by the number of different inventions that luthiers came up with to make their ukuleles unique looking and/or better sounding. Ironically, my choice here for the Great Ukes column is a model that not only eschews any sort of structural or sonic innovations, its very design makes it one of the poorest-sounding ukes ever made. But the same thing that makes it short on tone also makes it one of the coolest ukes ever: The aptly named Jungle Uke has a body that’s completely covered in fake leopard fur fabric!

As you might guess, the glued-on faux-fur fabric has a significant damping effect on the vibration of the uke’s top, making it sound soft and lifeless. Not helping matters is the top itself, made of solid white wood (possibly birch) that’s 1/8-inch thick; a typical soprano uke’s top has a thickness of 5/64-inches. The sides and back are made of similarly stout stock—no fear of breaking this uke, should you take a tumble while riding your elephant. One thing that the fuzzy fabric has going for it is that it’s soft to the touch, which makes this uke very comfortable to hold and play.

The soprano-sized Jungle Uke has a 13-1/8-inch scale and a birch neck with 12 frets set directly into it—no separate fingerboard here. Gold and black decals mark the 5th and 7th frets, and a headstock decal shows “Jungle Uke” written in an exotic green bamboo font with a colorful image of a leopard just below it. The instrument lacks any sort of manufacturer’s label or markings (there may have been a paper label inside the body, but if so, it’s missing on mine). It was almost certainly produced by the Regal Musical Instrument Company of Chicago, the prime clue being the shape of the Jungle Uke’s headstock, which is identical to those found on the majority of Regal ukes made in the ’20s through the early ’50s.

Although I could find no advertising or catalog references for the Jungle Uke, it’s a fair guess that it was produced sometime between the late 1940s and mid-1950s. This timeframe coincides with the rise in popularity of jungle-themed adventure movies, which I’m sure Regal was eager to capitalize on. Jungle thrillers had been a staple for Hollywood studios as far back as the 1920s. By the 1940s, African-themed movies, always starring white actors exclusively, abounded with danger and romance—for example 1942’s White Cargo, starring Hedy Lamarr, who played the capricious “native” beauty Tondelayo. Johnny Weissmuller starred in no fewer than 15 movies in the ’40s based on Edgar Rice Burroughs’ Tarzan character. By the 1950s, jungle-themed films were box-office gold with enduring classics like The African Queen (1951), starring Humprey Bogart and Katherine Hepburn, and 1953’s Mogambo, starring Clark Gable, Grace Kelly, and Ava Gardner. Unfortunately, nary a single ukulele appeared in any of these films, leopard fur-covered or otherwise.

From the Ukulele store: The Ukulele – A Visual History traces the ukes evolution with colorful whimsy. Meet some of the world’s greatest ukulele players through profiles, photos, and more, with color photos showing more than 100 exquisite and unique ukes, vintage catalog illustrations, and witty ads that capture the craze of the 1920s and ’30s.