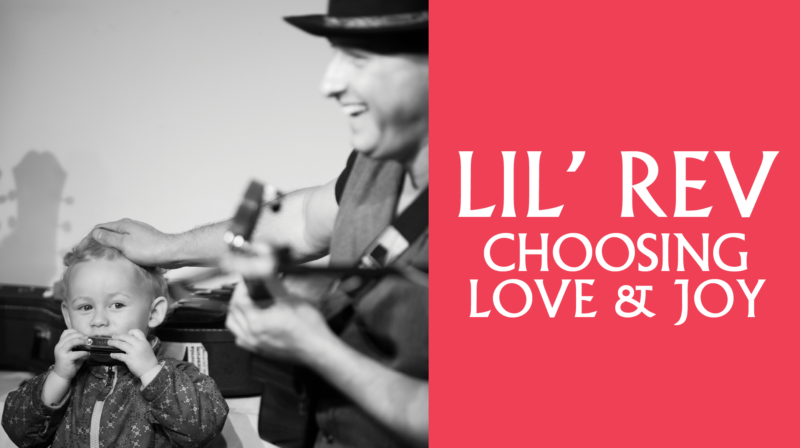 From the Spring 2017 issue of Ukulele | BY JIM D’VILLE

In 1980, 12-year-old Marc Revenson—now best known as Lil’ Rev—purchased a guitar with money earned from his paper route in Milwaukee, Wisconsin. This led him through a succession of musical instruments, including harmonica, mandolin, and banjo. Then, in 1993, “I was playing at an Irish pub in Milwaukee and a fan brought in an old, beat-up banjo-ukulele badly in need of repair, and gave it to me,” he says. “He told me it had been in his family for a long time and no one was using it. So I fixed it up and started playing it.”

And that was the beginning of Lil’ Rev’s fascination with the ukulele, which would lead him on a journey covering hundreds of thousands of miles over the next two decades, and endear him to tens of thousands of fans. But it was also the dawn of a career in which he would encounter love and tragic loss.

“As a kid I wanted to be in a rock ’n’ roll band,” he says. “All my idols were rock ’n’ rollers, ‘hair’ bands, heavy metal—Allman Brothers, Lynyrd Skynyrd, Mötley Crüe, and all that kind of ’80s music. By the time I was 16 or 17, I began the transition to more acoustic-based music. I started going to open-mics, meeting like-minded musicians, and after that playing on street corners in Milwaukee. I don’t know if I was consciously setting my intentions on actually making a living as a musician someday. I didn’t know what that looked like. And I did this secretly because no one would encourage their kid to become a professional musician. As they say in the Jewish community, ‘better a doctor or lawyer, but never a klezmer.’”

So how did this already accomplished multi-instrumentalist first approach learning to play the ukulele? “For the most part I’m self-taught. Being a plectrum player on mandolin and guitar, at first, I used a felt pick, like some people used in the old days. But as time went on, I started integrating fingerpicking, single-string leads, and chord melody into my ukulele playing. That’s when I got rid of the pick.” One of Lil’ Rev’s major stylistic influences on the ukulele is the “Wizard of the Strings,” Roy Smeck. Joel Eckhaus of Earnest Instruments in Portland, Maine, took lessons with Smeck in the 1970s, and recalls Lil’ Rev’s keen interest in the Smeck style:

“I was in Santa Cruz at the Far West Ukulele Festival in 2004 and he came up to my booth. He was hungry for knowledge—I had it. We sat down. I taught him some Smeck licks. He learned them.” About a year after he was given the banjo ukulele, Lil’ Rev acquired his first wood-body ukulele, a Favilla soprano. “That’s the instrument I’m holding on the cover of my first CD of all ukulele music, Fountain of Uke, released in 2003,” he says. “However, my first attempt at recording the ukulele is a CD from 1996 entitled Uke Town. Every year after Uke Town was released I was playing more and more ukulele. I had become smitten with it.

“After college in 1993, I decided to take a year off and work as a full-time musician. That turned into seven years. My earliest tours were not ukulele tours, per se. They were a patchwork of Jewish community events, house concerts, coffee houses, and street corners in Seattle, New Orleans, places like that, with me playing guitar, harmonica, and the occasional ukulele tune thrown in.” Coincidentally, about this time the ukulele was quietly sneaking back into the American musical consciousness. Jumpin’ Jim Beloff, who has been the leading proponent in the current wave of ukulele popularity, remembers Lil’ Rev contacting him in the early 1990s: “He was very enthusiastic about our ukulele songbooks, and I started to hear from him on a regular basis. He was obviously pleased that there were others out there encouraging the revival of the instrument.”

In 2000, Marc settled down and took a job as a grade-school music teacher and college lecturer in Milwaukee. Then, in 2005, he was offered the opportunity to write music instruction books for Hal Leonard Publishing. “I just happened to be in the right place at the right time,” he notes. “Hal Leonard, which is based in Milwaukee, was looking to start building their ukulele publications. I also had the right skills of not only playing the ukulele, but also reading and writing music. And I was willing to take chances in my own life by quitting the relative security of a good paying job with benefits and going for it. So I got out of the 9-to-5 thing and I discovered how much I loved being self-employed. I like to work—I just don’t like being in the same place every day.”

Armed with a degree in Community Education, Rev found that writing books and traveling around presenting music workshops was right in his wheelhouse. “I just thought I’d be doing it at a grade school or college level, rather than out on the road. I guess life has a way of putting you on the path you’re supposed to be on.” To date, Rev has ten Hal Leonard titles under his belt.

A Treasurer of Strums and Technique

Helping to build Rev’s confidence as a performing musician during this time were the people of his home state. They did this in part by bestowing upon him a number of prestigious musical accolades, including the 2004 Best Folksinger Award from the Wisconsin Area Music Industry and the award for Best Harmonica Instrumentalist in 2000 by the same organization. Rev says, “Wisconsinites have been very supportive of my endeavors to play roots music.” Lil’ Rev also won the Hohner National Blues Harmonica Competition and in 2003 was inducted into America’s Old-Time Country Music Hall of Fame. And Lil’ Rev continues to give ukulele love to his hometown of Milwaukee as founder of the Milwaukee Ukulele Club and the annual Milwaukee Ukulele Festival held each October.

“It wasn’t until 2008–09 that my tours started looking more like ukulele tours. That’s when the ukulele infrastructure was starting to become apparent, especially the online presence. Ukulele clubs in tiny little towns I had taught at with eight or nine people now had 40, 50, 60 people. So I got out there and started doing it at a time when there were two or three full-time instructors at the most out there on the road.”  As the popularity of the instrument blossomed, so did the number of veteran players who started to emerge from the shadows. “Early on, I was seeking out those players who had come before me and trying to spend time with them: Lyle Ritz, Travis Harrelson, Fred Fallin, Bill Tapia, and a whole bunch of lesser-known players.”

As for his own development, Rev says his interest would always come back to the strum. “I was just fascinated with the strum-hand techniques and I knew once I could get a good grasp of that, all the rest would be totally obtainable.” So, as he began to create educational materials for the ukulele, “my focus on strumming techniques evolved into my own style and my abilities grew. I feel the most important contribution I’ve made to the American Ukulele Revival has been to pass along strum-hand techniques through my class Essential Strums & Strokes. It’s that ‘fascinatin’ rhythm’ that’s at the heart of everything joyful and timeless when it comes to playing the ukulele.”

Not only is Lil’ Rev a tireless proponent of the ukulele, he has also created a number of one-man cultural heritage programs steeped in his Jewish and Yiddish heritage. “I have a show called The Jews of Tin Pan Alley. There’s a lot of ukulele in that show, which tells the story of a number of famous Jewish entertainers, song publishers, dancers, comedians, and the like. I also have a show called Jews & Blues, which tells the story of small Jewish-owned blues record labels, like the Chess label owned by Leonard and Phil Chess. And finally, I have a show in which I feature Jewish and Yiddish folk tales and songs titled Fiddler on the Roof Meets Oh, Brother Where Art Thou.”

In 2008, Rev’s itinerant lifestyle transitioned when he met his wife-to-be, Carol Alvarez. Carol was also self-employed, as a massage therapist and yoga instructor. They married a year later. With winter being Carol’s slow time for work, she accompanied Marc for the first time on his annual three-month winter tour of over 16,000 miles, traveling from Wisconsin to Florida to California and Washington and all places in between. “She loved it,” he says. “She loved all the uke people and it didn’t take long to get smitten with that lifestyle.” When the couple’s daughter, Mariela, came along in 2009, she immediately became a ukulele road warrior, too.

Unfortunately, these happy family times would not last for long: In July 2015, Carol was diagnosed with Stage 4 lung cancer. The ukulele community rallied to the family’s aid by raising over $71,000 in a GoFundMe campaign. Carol passed away in December of that year. “A few days before she died,” Marc says, “Carol said she wanted her ashes scattered out on the West Coast, because those were some of the happiest days of her life—being out on the road with just the three of us. So we scattered her ashes last summer in Anacortes, Washington, near the San Juan Islands, in the redwoods of northern California, and other places she loved.”

Happy times have returned for Lil’ Rev and Mariela since Carol’s passing. He has reconnected with his high school sweetheart, Jenna Lynn McBain. “I decided that I wanted to love and I didn’t want to be grieving for years as I’ve seen others do. So I chose love. Jenna Lynn has been our angel and we honor Carol every day.”

Touring ukulele professional Stuart Fuchs says of Lil’ Rev, “Beyond his music and teaching skills, what inspires me about Lil’ Rev is the way he listens. Whenever we speak, I feel like he puts the world on hold. He lovingly shares his vast knowledge of traditional and roots music history with a spirit of humility and generosity that is inspiring to be around.”

And according to Jim Beloff, it’s Lil’ Rev’s love for and fusion of folk music and his heritage that make him the real deal. “I think Rev represents the Woody Guthrie wing of the ukulele party. He has passionately connected all of us who love this instrument with that folk side of the ukulele. He’s taken the ukulele and molded it into a unique art form, and he owns it—his character, his repertoire, and his performances. In that sense, what Lil’ Rev does is authentic, true, and remarkable.” Or as folk icon Pete Seeger once put it, “Listen to this! Lil’ Rev is great!”

Music educator and facilitator Jim D’Ville is the author of the Play Ukulele By Ear DVD series.