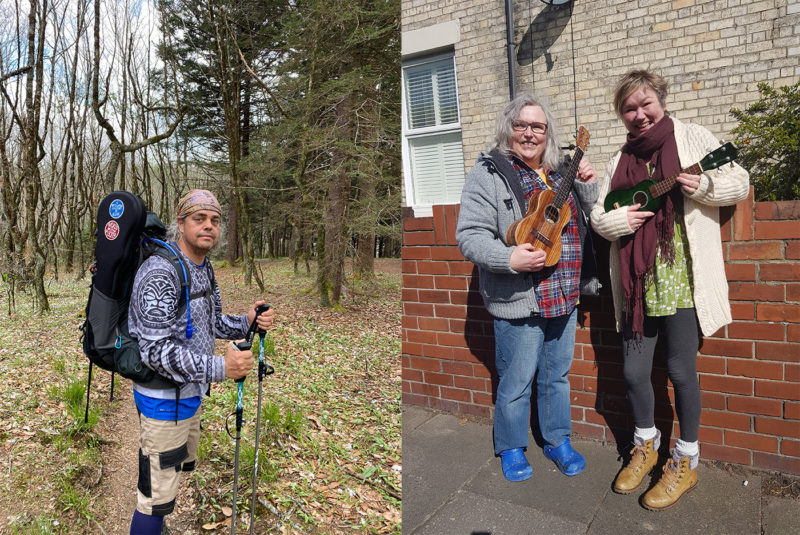 From left: Troy Janisch and uke on the Appalachian Trail; Fay Harding and Jen Bradley

Uke Tales: Hike the Appalachian Trail, Connect with Friends and Family, and More Things You Can Do With Your Ukulele

Here’s another fun and inspiring batch of stories from Ukulele magazine readers about their love of uke. We love hearing from you!

In 2020, I put two things on my bucket list: hiking the Appalachian Trail and playing the ukulele. These two goals came together in May 2021. New to backpacking, I found an experienced hiking partner and started sleeping outside to test equipment. New to ukulele, I joined ukelikethepros.com for lessons, the Twin Cities Ukulele Club for community, and embarked on an online 100 Day Ukulele Challenge to to hone my strumming and performance skills.

During the week I turned 54, I backpacked 50 miles of the Appalachian Trail through the Great Smoky Mountains. I had an Enya Nova concert uke, case and all, stuffed in my pack; I needed something light and durable, and it also had to sound great. It was the right choice.

While some backpackers discouraged me from carrying the extra weight (2.5 lbs), I had no regrets. After a full day of hiking through the mountains, it can be tough to lift your ukulele—until you see how much it lifts everyone’s spirits.

Individuals hiking the entire Appalachian Trail often choose nicknames to share in logbooks and among each other. I did something a little different: I invited my hiking partner to sign my ukulele, and I will continue doing so until I have completed the entire 2,190-mile trail. My trail name is “Shotgun” because, like my ukulele, I’m along for the ride among more experienced hikers—at least so far. I expect the journey to last seven to ten years, depending on the number of sections I hike each year.

My Uke Tale isn’t one of musical brilliance or massive achievement in the big scheme of things. But in the little scheme of things, the ukulele has been a miracle for me and for my friend Jen.

I’m just over half a century old and have never gotten over that longing to make music. Thing is, I have always believed I was tone deaf and a musical klutz (piano, violin, and guitar teachers agreed). Just over a year ago, my other half was buying a guitar and I saw a ukulele on the wall, liked it, and on an impulse bought it.

Lockdown effectively halted business, and has given me ample time to clart (Northeast England slang for “mess about”). To my delight, I’ve discovered that my self-diagnosed tone deafness is collyrot. I find that I can play more and more of the tunes and songs I know and love. I’ve discovered I’m not much of a strummer, but I can fingerpick to my heart’s content.

My friend Jen’s business was also squashed due to lockdown, and she’d been feeling extremely low and isolated. Her husband came across an old green ukulele in the loft, spruced it up a bit, and gave it to Jen to cheer her up. We’ve been playing together over Facebook’s Video Messenger over the past few months—and you should hear her play and sing! Every week we get together and play—she sings and I kind of talk in Beat poet fashion to the music. We laugh until we have tears rolling down our cheeks.

Our ukuleles have brought us so much joy and a real sense of achievement, as well as cementing a beautiful friendship during a time which could have been dark and lonely. The force is strong in the ukulele!

Soon after I arrived at Chanute Air Force base in Illinois in 1961, the squadron commander, upon hearing that I was from Hawaii, gave me a plastic ukulele that was worth about 75 cents. Later, at a squadron beer bust, he asked me to play the ukulele for the troops, so I played “The Stars and Stripes Forever” and brought the house down. The major must have assumed that everyone from Hawaii played the ukulele. Little did he know that I was a professional ukulele player!

(Byron is a well-known composer, arranger, and music professor who has been profiled by and written for Ukulele.)

The ukulele has been a source of joy during the last year. I work as a respiratory therapist in California, and Covid has put my skills to the test in the ICU. Having a little time to strum helps clear my head and be ready for another long shift.

The Family That Ukes Together

The ukulele has been great during the pandemic. I started playing a few years ago, when my youngest grandson wanted a soprano ukulele for Christmas. He’d been impressed by someone he saw playing and wanted to play. He didn’t bother—and neither did any of his brothers—to do more than make a bit of noise with it, so I picked it up and learned a few two-chord songs that I would play as they got home from school. Pretty soon, two of the four were interested enough to learn a few chords, and then it was “Hey, it’s my turn to play!” Next thing you know, their dad started playing uke occasionally and got out a guitar (that I’d never heard him play) to jam with us. I bought a concert uke. A year later I got my six- and eight-year-old granddaughters playing. We got together very early in the pandemic and played a front-yard concert for some of their friends, kind of a drive-in concert where a few kindly adults they knew from church humored us by singing along with us from their cars.

The rest of last summer we got together three or four times a week to play songs over Google Talk. Since the older one is more advanced, I usually played with them one at a time. They picked the music. During the school year with all their Zoom school time, we’ve played less but the uke is still a great way to connect with them. My older grandson and I have played together multiple times for a neighbor whose age and health make it especially important that she maintain her distance. We even took her requests and added her favorite songs to our notebooks.

I am looking forward to summer and playing more outdoors; then, when we get to herd immunity, getting back with my ukulele group. Maybe I’ll be able to keep up better—unless they’ve all been playing even more than I have!

I’d taken accordion lessons for eight years by the time The Beatles arrived in the U.S. in 1964 and the “British Invasion” had begun. I needed to learn to play guitar. I asked my mother for a guitar for Christmas.

Upon opening the much-anticipated package on Christmas morning, there it was—not a guitar, but some red, four-string nightmarish aberration of one, along with a Mel Bay book titled How to Play the Baritone Ukulele.

“Mo-om,” I whimpered, theatrically, trying—but not succeeding—to keep my changing boy/man voice in check. “This is not a guitar!” “No, it’s not,” she replied calmly, in her elegant Texas drawl. “Guitars are expensive. I don’t know if you can even learn to play a string instrument. If you can show me that you’re serious, learn a few songs on the uke and then we’ll talk about guitars.”

I knew that she liked guitar music—her daddy had played and sung live on a local radio program in Dalhart, Texas, during the Great Depression—and her wisdom and intuition had always proven to be spot-on in the past. I stalked off to my bedroom in a feigned “huff,” sat on my bed, and opened the book to “Down in the Valley.”

Within two weeks, I’d learned, and memorized, every three-chord song in the book. I proudly handed it to her and announced cheerfully, “Pick a song; any song!” “Can you play ‘The Yellow Rose of Texas’?” to which I replied, flatly, “That’s not in the book, Mom.” Her retort: “That wasn’t my question, now was it?” After another hour or two in my bedroom, I managed to learn the song. After hearing me playing the three-chord accompaniment and singing (croaking) along, she entered my sanctum sanctorum without knocking. “Tell me about that guitar you want,” she said, with a smile I’ll never forget!

I’ve now played and taught guitar for over half a century. But I still play that $29 1964 mahogany Orlando baritone uke, too—and the seven or eight other ukes I’ve acquired over the years. Whenever a young person comes to me to learn guitar, I still lend them a bari uke and tell them, “If you can learn a few songs on this…”