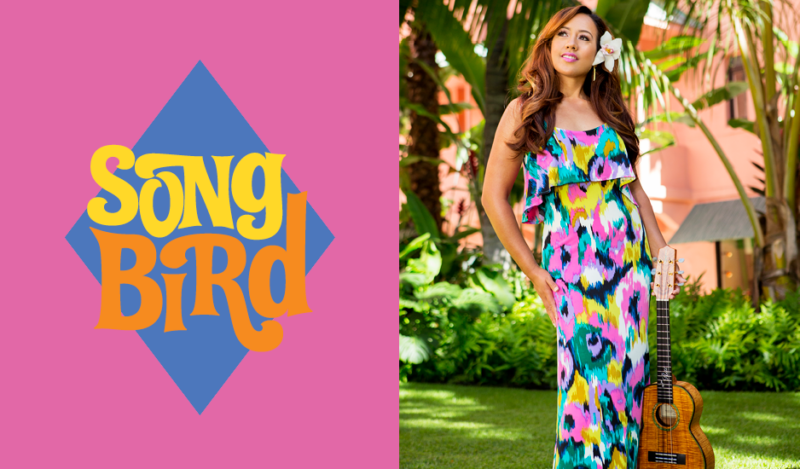 BY AUDREY COLEMAN | FROM THE SPRING 2018 ISSUE OF UKULELE

The heart-melting soprano voice soars over the strum of her ukulele. “When I just sing, it feels like I’m trying to follow the guitar and bass,” says Raiatea Helm. “But when I play and sing, it’s different. I feel like I’m really, really part of the music rather than just being a vocalist.”

In the fall of 2017, the Molokai-born songstress enthralled a Southern California audience at Whittier College with Hawaiian-language mele (chants or songs) and Hawaii-inspired songs in English. In her introductions to each of them, she drew upon her knowledge of Hawaiian culture as well as her personal experience.

It was a generous performance. No opening act. No instrumental numbers by the backup trio to give her a breather. Wearing a form-fitting, calf-length dress and very high heels, she sang and strummed for nearly two hours. At the end, after the audience had shouted Hana hou! (Encore!) for several minutes, Helm returned to the stage. With a laugh, she kicked off her heels, yanked up the bright print dress to her knees, and danced a hula.

Raiatea Mokihana Maile Helm burst onto the Hawaiian music scene at the age of 16. Barely two years later, her debut album, Far Away Heaven, earned critical accolades and thrilled Hawaiian audiences. In 2003, she became the youngest artist ever to be named Female Vocalist of the Year by the Hawaiian Academy of Recording Arts. Since then, she has received seven more of the Academy’s prestigious Na Hoku Hanohano awards, plus two Grammy nominations. Concert tours have taken her beyond Hawaii to a multitude of mainland venues and throughout Asia and the South Pacific. Frequently, she performs at festivals dedicated to traditional Hawaiian music.

About a week after the Whittier concert, Helm shared highlights of her musical and personal journey, speaking from her home in Honolulu. During our conversation, she pronounced the word ukulele in the traditional Hawaiian way—oo-koo-lay-lay—making the initial glottal sound expressed in writing by the okina mark (‘ukulele). She communicated in a way that was frank and real. There was no trace of practiced assurance or glibness. When she needed to think through an answer, she took her time. Sometimes she corrected herself. Her reactions also could be quick and spontaneous. At all times she expressed herself with a certain modesty, what one might call humility.

Because Helm’s singing and strumming appear so natural and effortless, it’s hard to believe that she struggled to master accompanying herself on the ukulele. “I practiced the strumming non-stop before I got into singing,” she says.

Over time, she developed a strum to complement her vocal style. “I think everybody creates their own strum,” she muses. “I go up (the fretboard) and do a double thing when I come down… It’s not always regular. It sort of comes after the beat. I don’t know where that comes from. It’s like Dada da dada, Dada da da da… My strum has already found its natural place. I don’t think about my strum.”

She has turned her attention to getting more comfortable with chording. “Trying to remember the chords takes a lot of effort,” she says. “Friends like Bryan Tolentino have been a great resource, as have other friends that don’t normally play ukulele but know how to find those extra chords. That’s been helpful, as I’m not a ukulele person. I don’t know the ukulele like Jake knows it. I use the instrument to accompany me and keep rhythm.”

She admires celebrated vocalists from past decades such as Lena Machado and Genoa Keawe, who accompanied themselves on the ukulele. “It was something that they used to control the rhythm and music and to help express their feelings.”

Listening to their recordings, Helm also absorbed the ability to ha‘i, a rapid vocal move from the lower to the higher register. The ha‘i expresses deep feeling and incorporates a subtle catch in the voice. “It’s kind of like a cry,” she explains. “It comes in whenever the vocalist feels it’s appropriate. I feel you cannot teach someone how to ha‘i. Ha‘i is a gift. I had heard it and it came out naturally and that’s why, at the start of my career, a lot of folks supported me.”

While her musical heart and home remain in Hawaii, she is not averse to performing other genres. Occasionally, she inserts a pop tune into concerts and recordings. Some day she would like to sing Puccini’s operatic aria “O mio babbino caro.”

Before singing became her passion, Helm bonded with the ukulele. Her first teacher was her maternal grandmother, who was steeped in Hawaiian culture. “My first memory of the ukulele was when I was four years old. My tutu played a Kamaka concert,” says Helm. “She came to Molokai [from Kauai] to help raise the kids. I was her favorite. She was a very important person in my life and I miss her terribly.”

As Helm grew up, the ukulele took on a special role for her. “It was like a safety blanket. If I had anything to feel uncomfortable about, I had the ukulele. That’s what it was to me.”

She became fascinated by the instrumental music she heard while at a local halau (hula school). She recalls stealing glances at the accompanying musicians while dancing with her class in the Merrie Monarch Festival, the Olympics of hula.

In sixth grade, to her delight, an instructor taught the students ukulele. Most of her classmates lacked her enthusiasm. Laughing, she recalls, “Let’s just say that I was the only girl that played the ukulele.”

Not long afterward, her older brother told her that she would never be any good at playing the ukulele. Discouraged for a while, eventually she realized that her brother’s model of success was the Ka‘au Crater Boys, a duo wildly popular for lightning fingerpicking and offbeat chording. “Everybody was trying to play like the Ka’au Crater Boys. I remember we had competitions in Molokai on who could play most like them. Later, when I discovered traditional Hawaiian music I figured out, ‘Okay, this is my calling.’”

At the age of 16, on the cusp of a remarkable singing career, she received her very first ukulele as a Christmas gift from her parents. It was a Mele brand tenor crafted in Maui. Since then she has acquired over a dozen ukuleles. Some were gifts from KoAloha, the ukulele company that was her first official sponsor. She received others from supporters she met on the Hawaiian music scene, such as renowned luthier Chris Kamaka. “You know what?” she exclaims, “On my 21st birthday, Uncle Chris gifted me with a beautiful six-string tenor. It was gorgeous!”

The photo on the cover of her second album, Sweet and Lovely, shows her holding that instrument. Today, as an official Kamaka artist, she is playing her second Kamaka tenor. Recently she switched to a high-G string. “When I was playing a KoAloha, I really liked playing the low-G, but now, because I’m taking theory classes, having the high-G is much more recommended according to [musician/professor/composer] Byron Yasui and [jazz-uke virtuoso] Benny Chong. They prefer the high-G.”

She is also switching to the strings Kamaka produces. “They use strings that give a much softer sound. They’re like the ones that Jake has.”

She fingerpicks a bit at home, but has no interest in doing so on stage. “I do it for fun. I’m happy where I’m at as far as being a vocalist incorporating the ukulele for strumming, but not trying to be a Brittni Paiva or Taimane Gardner. That’s their craft. That’s their gift.”

Always seeking to expand her musical vocabulary, Helm began working toward a degree in music at the University of Hawaii in the fall of 2017. “I’m so glad I made the decision to go to school, because I know that it’s going to open so many doors after I learn what I plan to learn. The music world is enormous… It’s hard, but I love it.”

It took a few months to balance the hefty course load with the demands of her career and commitment to cherished relationships. Why undertake this at the age of 33? “To better my craft,” she says and then chuckles. “In the second week, I said to myself, ‘What am I doing?’ But now I am just fascinated with music theory, oral training, piano, and diction for singers—in German, Italian, Latin, and French.”

For those wanting a career in music, she recommends staying in touch with one’s roots. “Having a good foundation is key, whether it’s a music foundation, a cultural foundation, or a business foundation, if that’s your focus,” she says. “My foundation was love. Family [meant]having the knowledge that was instilled by my tutu and my [paternal] grandma. Being the grandchild, I feel that it is my mission to learn about our history and lineages… Having the matriarchs in my life was vital so that I could be inspired and find confidence.”

She stresses trusting oneself. “Nothing beats your inner voice, your true instincts. Be open-minded and take time to think things through. With music, you don’t have to rush. And that’s what I learned. Being creative, everyone works at a different pace.”

Helm’s childhood on Molokai contributed to her personal foundation. During those years, she learned how to relate to others. “I’m not saying that everybody is on good terms, but we aloha each other. We respect each other,” she says. “When you grow up in such a small community, you are automatically taught to be humble,” adding with a laugh, “You have to be! With a father like mine, he’d wring my neck if I was stuck-up or not humble. It’s just a value that we were taught at an early age.”

The town of Kaunakakai, where she spent her early years, has barely changed. “We have a wharf. It’s about a mile long… That’s where a lot of kids in high school hung out. We would also spend time in a place called Kala‘e, where the lookout is for Kalaupapa [a seaside cliff that faces the former leper colony].”

Deeper awareness of her Hawaiian identity came when she turned seven. In that year, her father acquired a long-term lease for two acres of homestead land, lots allocated to Molokai residents able to document their native Hawaiian ancestry. As often as she can, Helm travels from Honolulu to visit her parents in the home her father built there. She enjoys watching her now-retired parents make progress on their backyard farm. “They’re growing watermelon, cantaloupe, corn, beans, and tomatoes. It’s amazing! My dad set up an irrigation system and I helped him with some of it.”

In addition to catching up with her parents, aunts and uncles, and many cousins, she supports local projects by performing. “If the community needs help in fundraising, I’m there in a heartbeat if I can.”

Whether performing at a fundraiser, festival, or on a concert stage, Helm’s singing and strumming flow from the foundation of her family’s love, especially from her tutu’s and grandma’s nurturing. “There was something spiritual in their presence. It has a lot to do with the past of our people and my lineage. I think that has allowed me to embrace traditional music in the old style.”

Download our FREE guide on getting off the page and into the song to spend more time playing and having fun on ukulele, and less time trying to keep up with the sheet music.